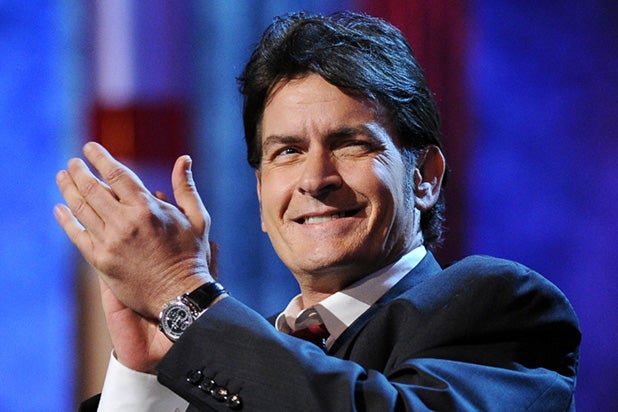 Choke on this, Sean Spicer. Or maybe not.

The White House press secretary found a seemingly unlikely fan Monday in the form of Charlie Sheen, just weeks after the former “Two and a Half Men” star wished asphyxiation upon him.

The source of Sheen’s dramatic change of heart? Spicer’s neckwear.

“@seanspicer your tie is now FABULOUS!” Sheen tweeted Monday. “Pardon my earlier rant. If our paths do cross; drinks are on me!”

Sheen finished off his social media love note to the Trump mouthpiece with, “Have a great day!”

The actor’s tone on Monday was a far cry from his attitude toward Spicer earlier this month, when Sheen opined that Spicer’s tie should be used to cut off his oxygen supply.

“Bro, that shitty Windsor should b remodeled to asphyxiate u,” Sheen tweeted at the time, calling Spicer a “shameful husk.”

“Crawl back into your mom you baleful noxious shoat,” the actor also advised Spicer.

See? It really is possible to come together under President Trump.

Also Read: Charlie Sheen Apologizes to Rihanna After Calling Her 'That B---'

Time will tell if Spicer and Sheen actually get together to, uh, tie one on. But a word of advice to the press secretary: If you decide to party with Mr. Tiger Blood, you’ll probably want to pack a spare liver.

your tie
is now FABULOUS!

if our paths do cross;
drinks are on me!

have a great day!

bro,
that shitty
Windsor
should b remodeled
to asphyxiate u.

U R a shameful husk.

crawl back
into your mom
you baleful
noxious shoat.
© pic.twitter.com/cK1IaR2o3T