Charlie Sheen has returned to his Encino home, but what happened in Aspen is not staying in Aspen.

Wife Brooke Mueller’s Christmas morning 911 call brought the resort town’s police to their holiday home – and half a day in jail to the “Two and a Half Men” star. 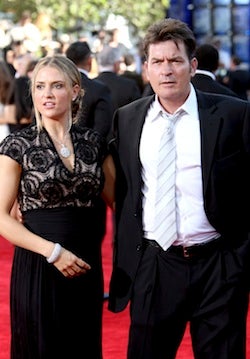 Mueller is said to have later retracted the domestic-violence accusations she had made to the cops.  At noon Monday Pacific time the Aspen P.D. was expected to release an updated information bulletin. For now the Aspen District Attorney’s office is neither confirming nor denying accounts of the incident.

Those would include such details as: whether Mueller was legally drunk when she called 911 – the DA’s office won’t even confirm that sobriety tests were given; that Sheen is accused of brandishing a knife at Mueller; that Mueller retracted her charges.

Arnold Mordkin, a Chief Deputy D.A., told TheWrap that his office would not reveal the identity of an alleged victim of domestic violence. He did, however, say that he could – though not necessarily would – prosecute an individual who lied to police about such an incident.

“If someone makes a false report to the police,” Mordkin said, “that’s a crime and I do prosecute that.”

Even if Sheen is cleared of any wrongdoing and no charges are pressed, the Aspen imbroglio has shown what can happen in the 24-hour news cycle when raw allegations collide with a troubled celebrity.

Filled with unflattering photos of the couple, including a new Sheen mug shot, TMZ’s initial scoops of Sheen’s arrest whetted public appetite for a potentially long and humiliating legal narrative for the 44-year-old actor.

TMZ’s first story was posted Dec. 26, 12:06 a.m.; two and half hours later, the narrative tide had turned when the site said it had information that Mueller was legally drunk when she made the 911 call and that Sheen was not. By Dec. 28, TMZ and other gossip sites were pillorying Mueller’s “big fat smile” and apparent indifference to the commotion she had allegedly caused.

The headlines about Sheen’s wife-threatening situation filled more than a holiday news vacuum. For many gossip consumers they validated Sheen’s bad-boy image — a reputation based, certainly, on several brushes with the law during the 1990s but burnished into legend by the tabloid media. A public rush to judgment about his Aspen arrest was inevitable, given the way so many members of Hollywood seem to be eternally cast in the reality TV shows that are their own highly scrutinized lives.

Many of us have grown so comfortable equating the words “Charlie Sheen” with “violent drunk” or “Hollywood skirt hound” that we were shocked and, perhaps, a little disappointed when the exculpatory details about Mueller’s 911 call soon emerged.

No wonder that Sheen, who’d been outed as a Heidi Fleiss client years ago, has had his name splashed about in news accounts about Hollywood Madams Babydol Gibson and Michelle Braun. The irony is that Sheen’s name shows up in Gibson stories only because his name wasn’t found in her little black book, while all there is in Braun’s case are allegations that his name appears in her records.

Unless the complaint against him is dropped, Charlie Sheen will be returning to Aspen for a February 8 court appearance. Then, he would learn just how bad a boy the ski resort town believes he was on Christmas Day.