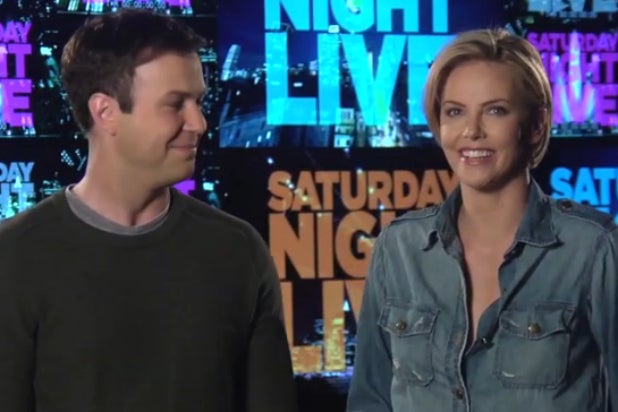 Charlize Theron is hosting “Saturday Night Live” this weekend and everyone in the cast is excited — except for Aidy Bryant, who might be planning to kill her.

In this week’s promos, Taran Killam helped Theron ham it up a bit in the Studio 8H control room before things got real. Apparently, Bryant and Theron have some beef that the tall, blonde actress was completely unaware of — and the “SNL” cast member is out for blood.

This weekend won’t be Theron’s first time hosting, but it’s been a while. The last time Theron hosted the sketch comedy show was 14 years ago, when she was in her 20s. Doing the math poorly, Killam rounded her age up to 78.

See video: Seth MacFarlane’s ‘A Million Ways to Die in the West’ Trailer Has Death and Blood Aplenty

Later, the two practiced “model face,” some sexier than others. The Black Keys will join the actress as the show’s musical guest on Saturday.