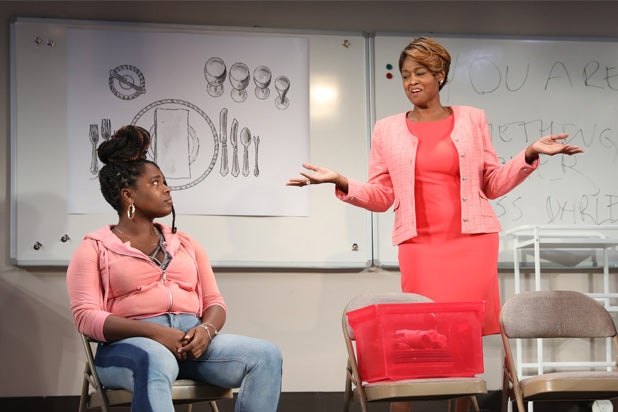 There are two remarkable women at the heart of Philip Dawkins’ new play “Charm,” which opened Monday at MCC’s Off Broadway Lucille Lortel Theatre.

One is Miss Gloria Allen, a 73-year-old retired nurse and transgender woman who rose to new prominence several years ago by teaching an etiquette class to youth at an LGBTQ center in inner-city Chicago. She inspired Dawkins’ lead character, here dubbed Mama Darleena Andrews, who has been “living my truth since I was 19.”

The second is Sandra Caldwell, a veteran actress with recurring and guest roles on shows like “Soul Food” and “Law & Order SVU,” who brings Mama to full and glorious life on stage — perhaps empowered by her decision to make public her own truth as a transgender woman.

Mama Darleena is inspired to teach her class — which includes full quotes from Emily Post and instructions of the placement of salad forks — after seeing and despairing at the unseemly behavior of young LGBTQ people. “I’ve never been more ashamed of my community,” she tells her class, which includes a grab-bag of youth representing different hues on the rainbow-flag spectrum.

She’s refreshingly old school, even embracing the term “tranny.” “Back in my day,” she explains, “that was about the nicest thing anyone ever called me.”

But she’s also willing to accommodate changes in the landscape of gender identity, as when encountering the center’s program director, a non-binary individual who prefers the pronoun “they” and goes by D (Kelli Simpkins).

“I’m just an old dog, and you’re teaching me new pronouns. That’s all,” Mama Darleena says after being corrected by D.

Even here, she finds the social graces to be a steady crutch on ever-shifting ground. “People are always saying ‘I’m sorry,’ when what they really mean is ‘Excuse me,'” she tells D. “Apologies are only necessary when one has caused offense. ‘Excuse Me’s’ are for when one has made a mistake.”

Then she adds, “I hope in the case of my getting your pronouns wrong, I can ask you to Excuse Me.”

Darleena is a font of such aphoristic gems, delivered by Caldwell with an imperious command of the stage that brooks no back talk. And despite the unruliness of her students, and their disparate backgrounds, she manages to break through their fronts and their casual cruelty toward each other. “Not everyone can be beautiful,” she says. “But everyone can be charming.”

In a slap-dash second act, Dawkins introduces some creaky plot mechanics — an overheard conversation, an act of betrayal, a medical crisis, then a hasty denouement — that also depart from Miss Gloria Allen’s true history in significant ways. That’s unfortunate, though it ultimately does not detract from the overall power of its central character — or Caldwell’s performance.

“Charm” is on sturdier ground when the focus remains on its muse, who embraces old-fashioned values as a means to survive and even thrive in a culture too often given to incivility and ugliness.

“The whole world is already out there trying to knock you down,” she explains. “You don’t need that from each other.”