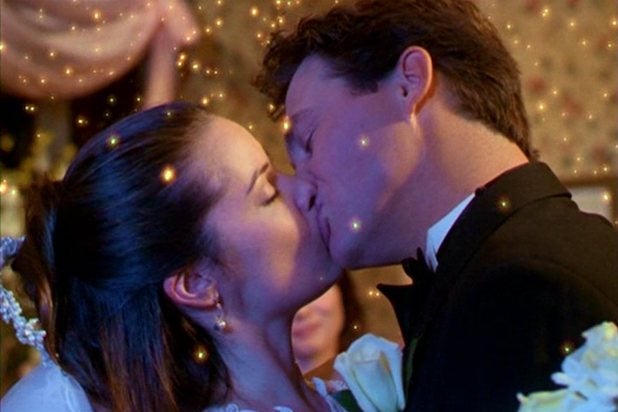 In honor of the Power of Three turning the big 2-0, TheWrap spoke with Krause about his “Charmed” life, including Piper and Leo’s never-ending drama, where he lands in the Paige vs. Prue debate, and his thoughts on The CW’s upcoming reboot (which Combs isn’t really a fan of).

And, yes, he’s aware of all the jokes that are made about Leo, ever the pacifist, being constantly steamrolled by Piper, Prue (Shannen Doherty), Phoebe (Alyssa Milano) and Paige (Rose McGowan) on a daily basis.

Were you ever truly worried Piper and Leo wouldn’t end up together?

For me it’s just, being one of the only males on this show, any time Leo goes away it’s the fear of “Is it over for Leo?” When we’re together the only drama we can create is when I die or when I go away. Every single time I was concerned I wasn’t going to be a part of the show.

Holly is such a great actress you want to play scenes with her that are emotionally involved, whether it’s happy, sad, whatever it is. So it was always a thrill when we got a chance to do something that was poignant emotionally, not just battling a demon or figuring something out. That we had to deal with these real emotions. Working with her like that, it was a treat for me.

What was it like learning about the crazy twist that Chris was actually your son in Season 5?

Talking with Brad Kern, he didn’t want to tell us. There came a point in one of the scripts where it was like, “OK, what’s going on?” And he told us and was, like, “I need you to feel like you don’t know. Just to play it out as if this is the worst person on the planet, so that when we do do that scene it’s a surprise.” But I believe I only found out about a week before the reveal. They held that one pretty close to the vest.

You’ve all talked about this so much already, but looking back now, what did Prue’s (Shannen Doherty) death at the end of Season 3 mean for the show as a whole?

Shannen’s departure I think was a surprise to everyone. I didn’t expect that she wouldn’t be back. She was such a big part of creating the show and had brought her fanbase and talents to it. So when we found that out, it was a big surprise and wondering how we were going to go on. And then we introduced Rose McGowan [as Paige], who brought her own personality and talent and we lasted another five years. So, kudos to her and her talent. But that was a big surprise, sure.

Where do you land in the Paige Years vs. Prue Years debate?

It’s two different shows almost. Shannen played a bad ass and the dynamic changed when Paige came in. She’s much more bubbly and free and then Piper became the matriarch. And that’s when Leo and her became the “adults of the show,” if you will. So it changed all the storylines going forward in how we all reacted and what happened, which was great for me. I was just lucky to be there, for sure.

Have you heard all the jokes made about the girls steamrolling over Leo all the time?

I knew what the show was going in. The girls are the strength of the show. My role was to be deliverer of news, the greater good, always the good choice, the pacifist. It felt like real life, I guess, but, you know, I’m in on the joke! Leo is a pacifist. Leo is confrontative when he has to be, but the whole story for him was to take care of everyone with love and kindness — you’ll always win.

Also Read: The CW Boss on Starting Up Sundays Again: We Wanted 'Shows That Empowered Women'

What was your favorite line of Leo’s?

“I’ll check with the Elders.” I don’t know how many times I said that [laughs]. Oh, and “It’s all for the greater good!”

What are your thoughts on The CW’s upcoming reboot?

It’s a compliment that they would reboot our show. It’s a compliment to what the girls created initially. You know, what all four of them did for so long and our writers created.  I hope it’s a success, for sure. I think with “Charmed” there are a million storylines you can tell. With magic, anything can happen. It’s endless. Like you see with “Supernatural” it seems to be going after Season 25 or something [laughs]. So it’s endless storytelling and I hope the fans get what they want out of this.

Would you be a part of it if you were asked?

You know, going to all the comic cons and seeing how many fans we have all over the world, you know the fans want to see the girls, the original cast. They love the idea of “Charmed continuing.” They just want it to all be integrated. So if they ask me to be a part of it, I feel like it would be great for the fans. I don’t think Leo gets there without Piper though, I’ll tell you that much [laughs].