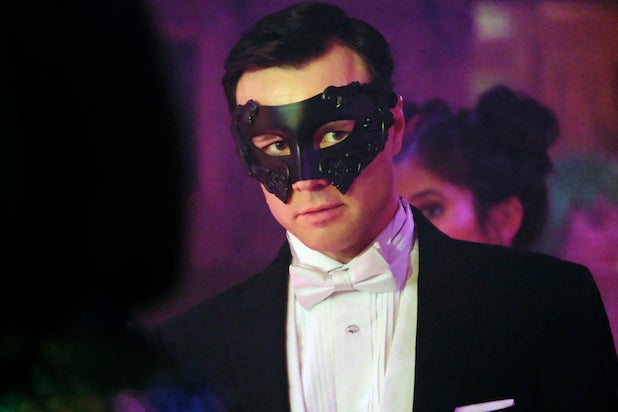 (Warning: This interview contains spoilers for “Charmed” through Episode 102.)

Phew! After the second episode of The CW’s “Charmed” reboot, we know Harry Greenwood is actually a good English chap intent on helping Macy (Madeleine Mantock), Mel (Melonie Diaz) and Maggie (Sarah Jeffery) navigate their journey as new witches. (We were almost 100 percent sure he was, but you can never be too careful when magic is involved.)

But that’s about all we know about Harry for now. Well, that and that his snap-and-swirl orbing technique is definitely different from the bright lights Leo Wyatt and company traveled through in the original series, starring Shannen Doherty, Holly Marie Combs, Alyssa Milano, and later Rose McGowan, which ran on the now-defunct WB network from 1998-2006.

And if you aren’t a fan of the change, Harry’s off-screen alter ego Rupert Evans tells TheWrap there was actually a pretty lengthy discussion about the whitelighter’s mode of transportation on the reboot, though he isn’t actually familiar enough with the original “Charmed” to know what you’re complaining about.

“I’m going to be really honest with you. I never saw the original, so I don’t know the reference, the difference between the two,” Evans told TheWrap in an interview Tuesday. “So I don’t know why the decision was made, or how it would be different because I haven’t seen the original orbing. But we had a long talk about this. The clicking is not actually an essential part of Harry’s orbing. He does that really as a sort of affectation, a bit of showing off. So he is able to orb without the clicking. I don’t know how different it is, cause that was kind of made as we progressed through the pilot.”

The orbing change is one of many differences between the reboot and the WB drama. But, revisions aside, Evans says creators Jennie Snyder Urman, Jessica O’Toole and Amy Rardin are invested in making their show just as packed with fantastical creatures and storylines as the first “Charmed” was.

“I promise you, the mythology is definitely an integral part of the show — and I am very hot on mythology,” Evans said. “And one of my big things taking the job was, we had to make sure that the mythology was absolutely watertight and we all understood what we were doing because if we don’t understand the characters’ mythology, then the audience won’t.”

“I know in every episode, or every other episode, there are definitely new demons and new battles to fight and that’s really great,” Evans said. “We have some really great weird and wonderful creatures that the writers are coming up with. But I think it’s a darker tone than the original, I suspect. There’s definitely some crazy, crazy things happening. I mean really crazy stuff. But wonderfully crazy stuff.”

And what about Harry? What crazy things can Evans tease about his own character?

“Well, Harry died in 1957, so he was certainly human,” Evans said. “But I’m not allowed to reveal a) how he died or b) what he knows about his death. But all this becomes much clearer soon. Other stories with Harry are now coming through, we’re filming Episode 8, and Harry’s past catches up with him. Which is exciting and pretty key to the storyline.”

If you just aren’t satisfied with knowing so little about Harry right now, never fear, Evans says his backstory will be coming soon.

“You will certainly find out more and more,” Evans said. “In Episode 3, next week, you get to hear a bit more about his past. There are certainly lots of things, and there is a big thing in Episode 4 where you realize more about Harry’s past. But suffice to say, Harry is a whitelighter, but this isn’t exactly his first assignment looking after witches.”

Also Read: 'Charmed' Turns 20: Brian Krause on Piper and Leo, the Prue vs. Paige Debate and The CW's Reboot

Oh, and if you were wondering where the heck the infamous Elders are in all of this, Evans says that, because the sisters haven’t gotten a real grasp on their powers and the Book of Shadows, Harry’s bosses upstairs haven’t become a big part of the series yet, but they “certainly start to take a more active interest in the girls and become an integral part of the show as we go on.” So maybe we’ll get a glimpse of Elderland soon, rather than just a namedrop.