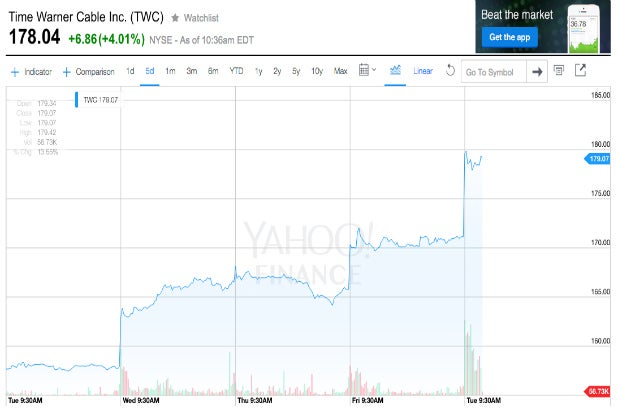 Shares of Time Warner Cable stock (TWC) soared on Tuesday morning following news that the company would officially be purchased by Charter Communications. Prices for Charter stock (CHTR) itself, not so much.

At the time of this writing, TWC was at $178.04 per share, up $6.53, or 3.81 percent. The stock’s five-day trading window is pictured above, highlighting the instant rise when the U.S. markets officially opened today.

This morning’s merger was valued at $78.7 billion, which means each Time Warner share breaks down to between $195.71-$200 apiece. TWC shareholders will be able to choose from one of two below ownership options:
1) $100 in cash and shares in a new parent company, equivalent to 0.5409 per Charter share.
2) $115 in cash and shares in New Charter, equivalent to 0.4562 Charter shares.

As for Charter, that stock was trading at $173.73, down $1.60, or a negative 0.92 percent. CityIndex Senior Market Analyst Ken Odeluga called the dip “muted” a little later on Tuesday, citing that CHTR is down 13 percent since March 31.

“This partly reflects the fact that much of this deal was already priced into the stock over the spring with the market having expected the firm to undertake a deal of one kind or another,” he told TheWrap.

See the morning’s trading chart below.

“Any vehicle controlled by (media investor) John Malone‘s holding companies will at some point to be roped into the parent’s highly leveraged acquisitive inclinations; the market will have made allowances for additional debt, probably years ago,” Odeluga continued. “It’s a similar scenario for Charter owner Liberty Media and the other major John Malone controlled vehicles — Liberty Media is down just 1.5 percent and Liberty Global, [down] 1.2 percent.”

The other publicly-traded player in the deal, Liberty Broadband (LBRDK, LBRDA), was also buying and selling down a little bit on Tuesday morning, shortly after the U.S. trading markets opened. As part of the day’s big deal, Liberty Broadband Corporation agreed to purchase $4.3 billion of newly issued shares of the New Charter company.

“Almost just another day at the office for Malone stocks,” Odeluga quipped.

The Charter-Time Warner Cable transaction is subject to approval by both companies’ shareholders, regulatory review, and other customary conditions. The companies involved in the complex deal expect the transactions to close by the end of the year.

Should it not go through, the mega merger could prove “messy and costly for many,” Odeluga said. Should the deal be shot down, he expects “a deeper and sharper fall than the one which followed the end of Comcast’s bid, with longterm investors likely to join short-term investors in a rush to the exit.

When all is said and done, Charter CEO Tom Rutledge will remain atop the new company. Robert D. Marcus is his counterpart at the current Time Warner Cable.