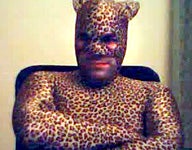 When the Webby Awards announced their 2010 honorees, one site that appeared to be missing was the online video-chat juggernaut – and weird dude haven — Chatroulette.

No more. The organizers of the Webbys announced on Wednesday that Chatroulette will get the 2010 “Breakout of the Year” Webby on June 14 – and its founder, Russian teenager Andrey Ternovskiy (who was outed as its creator by the New York Times), will be there to accept it.

David-Michel Davies, executive director of Webbys, explained the rationale: “Chatroulette’s success offers a refreshing reminder that the Internet still offers a level playing field where anyone with a great idea or product can flourish. The product of a simple yet utterly original idea, launched without any concern for profit or growth, Chatroulette embodies the sort of accidental innovation that only the Internet can produce.”