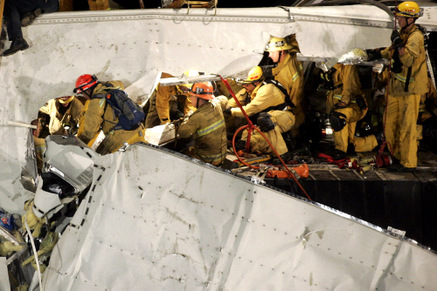 This gripping image by Jonathan Alcorn is from the tragic train wreck in Chatsworth, California, which as of now has claimed 23 lives. It is expected to claim more before the search is through.

No clear word yet as to the cause, but it appears that the commuter train missed a red signal, placing it on the same track as a freight train. Said a spokeswoman for Metrolink, the commuter line: "Our preliminary investigation shows it was a Metrolink engineer that failed to stop at a red signal and was the probable cause of the accident."

Alcorn’s photos were taken for the New York Times, and more of his vivid images can be seen at his blog.