Apple announced a bevy of new software updates at the Worldwide Developers Conference (WWDC) in San Francisco on Monday.

The tech giant introduced significant upgrades to iOS and its other operating systems, including redesigns to Apple Music and Messages. It also opened three key features — Siri, Maps and Messages — to third party developers and created the Home app to make for easier control of HomeKit using an iPhone, iPad or Watch.

After opening his presentation by offering his condolences to the victims of the Orlando shooing massacre, Apple CEO Tim Cook called iOS 10 “the mother of all releases.”

See some of the newest updates you’ll want to get excited about for this fall: 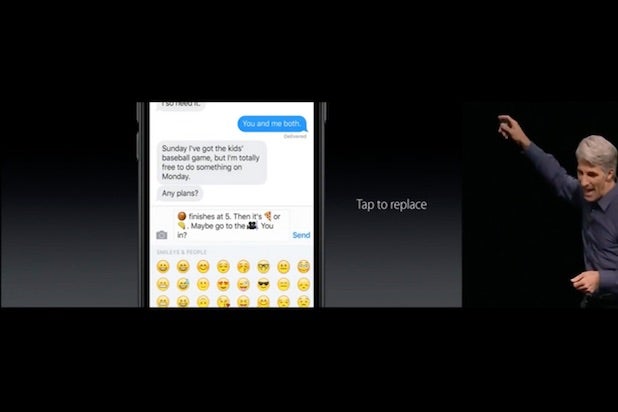 Tired of searching through pages of emojis to sprinkle into your messages? The new “emojification” feature, as Apple’s Senior Vice President of Software Engineering Craig Federighi (above) called it, will use predictive AI technology to identify and highlight words in a text that can be replaced with emojis. To do so, you just need to tap the word and the respective emoji will appear in place of the word.

“Children of tomorrow will have no understanding of the English language,” Federighi joked after making the announcement.

Emojis will also be three times larger in the new Messages app and will no longer be confined inside the text bubble. 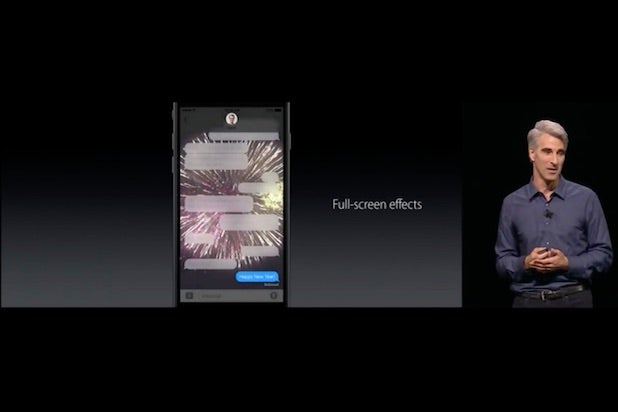 Apple is letting you inject more emotion into your messages with animated text bubbles. Though the bubbles and text return to normal size momentarily, effects include “slam,” “loud,” “gentle,” and “invisible ink.” The invisible ink option shrouds a message or photo until it is swiped away.

You will also be able to send messages with full-screen effects, such as having the background explode in fireworks to go along with a “Happy New Year” text.

For a more personalized touch, you can send also send handwritten messages which will animate as if written with ink. 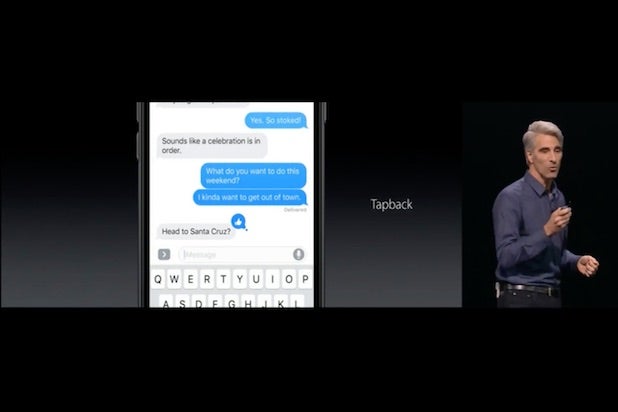 Rich links
When sending a URL link in a message, a preview of the page will appear instead of the URL. Videos links that are sent will also play directly in the message bubble so you don’t have to click through to a separate page. 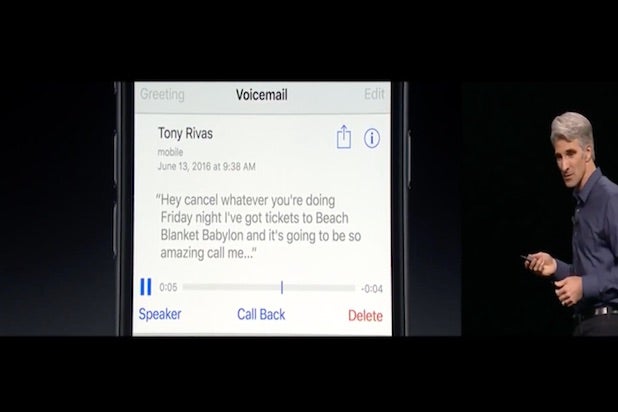 Good news for all you voicemail haters out there: The Phone app will now transcribe voicemails so you can read through them instead. The app will also support third-party extensions like Tencent, which can detect spam calls. 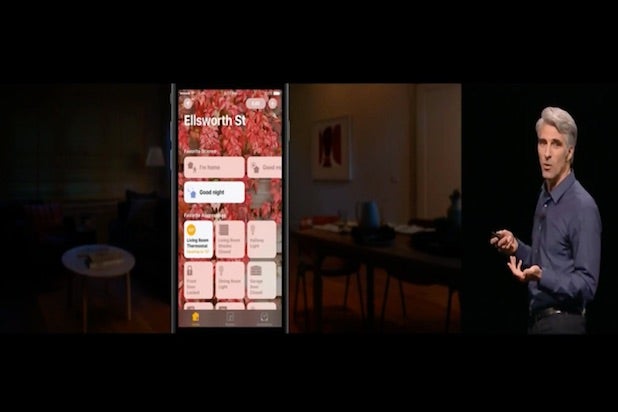 The HomeKit platform is getting updated with Siri in iOS 10 to combine all your automated home apps into one, titled “Home.” The updated app is also connected to Siri, which will allow you to do things like turn on your lights, adjust your thermostat, and lock your doors through voice-command.

Home is also built directly into the control center so you won’t have to open the app itself to use it. Instead, you just need to swipe up from the lock screen to access it.

Siri
You’ll soon be able to use Siri on your Mac. In addition to searching for items on your computer, Siri can locate items on the Internet for you, such as photos.

The voice assistant will also be open to other developers too across all platforms, meaning that you’ll get to use it on third-party apps such as Uber, Slack, WeChat, etc. 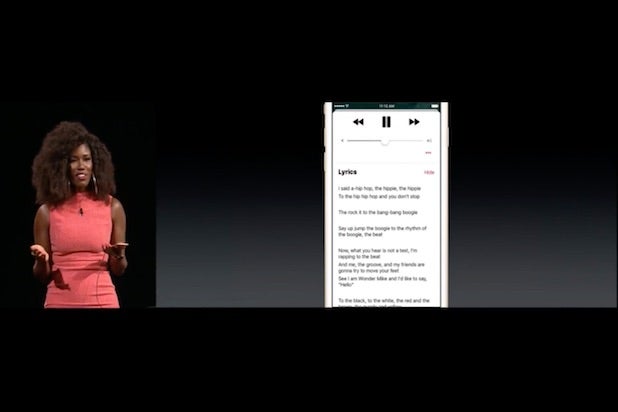 The app is now less cluttered and more minimalist with plenty of white space and bold black lettering. Lyrics are also included on tracks so you can sing along and sound like you know what you’re doing. 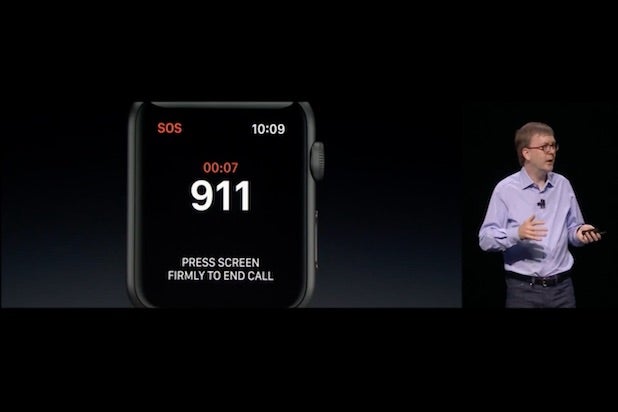 The focus of the Apple Watch software update is to improve the speed of the device sevenfold. In addition to auto replies on text messages, the updated software will allow you to write out your response on the watch face, which will, in turn, get converted into text.

Apple also included a safety feature in their update, which will let you contact emergency services through cellular data or WiFi by holding down the side button. The watch will also notify your emergency contacts, which will include a map location of where you currently are.

The watch will also continue to serve as another fitness tracker — but this time, for wheelchair users too. The watch will track the number of wheelchair pushes, instead of steps, and remind users when it’s time to move again with a “time to roll” notification. 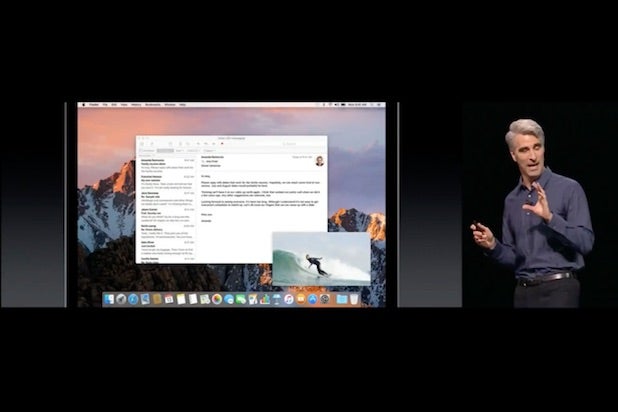 Apple is doing away with OSX and renaming it MacOS. The newest version, Sierra, has a number of cool new features.

Multi-tasking (or procrastination) will become much easier with Apple’s new “picture in picture” feature. If you’re watching a video but want to be checking your email at the same time, you can simply move the video to the corner and watch it side by side.

Apple Pay will also be your one-stop payment service on the web now. Purchases can be authenticated on your phone with TouchID.

For all you Apple Watch users, unlocking your Mac just got a lot less cumbersome. Instead of typing in a password, the Apple Watch will act as the authenticator to unlock your computer.

The new operating system also includes a universal clipboard, which will allow you to copy and paste between all your devices.