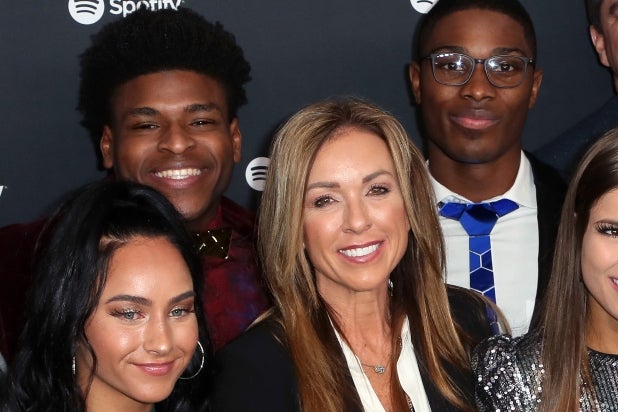 “My heart is shattered into a million pieces,” Aldama wrote in an Instagram post on Friday morning. She is currently competing on ABC’s “Dancing With the Stars” against competitors including “Tiger King” star Carole Baskin.

“I am devastated by this shocking, unexpected news,” she continued. “Our children must be protected from abuse and exploitation, and I’m praying hard for the victims and everyone affected. Please respect our privacy as our family mourns during this heartbreaking time.”

Harris’s arrest was confirmed by the U.S. Attorney’s office in Chicago, Illinois on Thursday. He was scheduled to appear in Chicago court later that day.

Reps for Harris, 21, have denied the allegations against him, which include sending sexually explicit messages to minors, enticing minors to send him nude images, and requesting oral sex from a 13-year-old boy.

“We categorically dispute the claims made against Jerry Harris, which are alleged to have occurred when he was a teenager,” Harris’s rep said Monday. “We are confident that when the investigation is completed the true facts will be revealed.”

The first public allegations against Harris came from a pair of twin brothers whose attorneys filed a child sexual exploitation lawsuit on their behalf. The alleged abuse occurred while the boys, then 13-years-old, were competing in cheerleading competitions, which Harris attended as a coach, mentor, trainer in association with USASF, Varsity Spirit, and Cheer Athletics. The boys, who remain unnamed in the suit, are now 14; Harris would have been between 19 and 20 at the time the events occurred between December 2018 and March of this year.

Earlier this week, the FBI investigated homes in Naperville and Crystal Lake in Harris’ home state of Illinois. Varsity, a private cheerleading company involved in organizing competitions and selling uniforms, was involved in alerting police to the allegations against Harris and is cooperating with the investigation. Read more about the company’s involvement here.

Reps for Navarro College have not responded to a request for comment, but a spokesperson for Netflix told TheWrap Thursday: “Like everyone we are shocked by this news. Any abuse of minors is a terrible crime and we respect the legal process.”