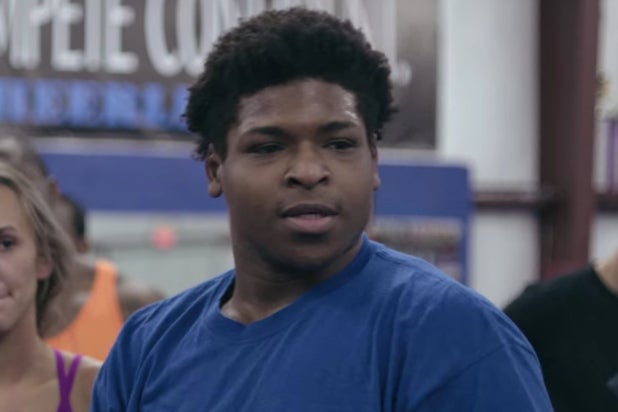 Jerry Harris, star of Netflix’s popular docuseries “Cheer,” has been arrested and charged with production of child pornography, a rep for the U.S. Attorney’s office in Chicago, Illinois said Thursday.

He is scheduled to appear in federal court in Chicago this afternoon.

USA Today reported earlier this week that the FBI was investigating Harris over allegations that he solicited sex and nude images from minors.

“The FBI was conducting court-authorized law enforcement activity in Naperville, IL and Crystal Lake, IL this morning. There is no further information at this time,” a spokesperson for the bureau told TheWrap Thursday.

“We categorically dispute the claims made against Jerry Harris, which are alleged to have occurred when he was a teenager,” Harris’s rep said Monday. “We are confident that when the investigation is completed the true facts will be revealed.”

Reps for Harris and Navarro College, where Harris was a student during the making of “Cheer,” did not immediately respond to requests for comment Thursday.

A spokesperson for Netflix told TheWrap Thursday: “Like everyone we are shocked by this news. Any abuse of minors is a terrible crime and we respect the legal process.”

The allegations against Harris come from a pair of twin brothers whose attorneys filed a child sexual exploitation lawsuit on their behalf, which accuses Harris of sending one of them sexually explicit messages and requesting nude images over social media beginning when they were 13 years old. The alleged abuse occurred while the boys were competing in cheerleading competitions, which Harris attended as a coach, mentor, trainer in association with USASF, Varsity Spirit, and Cheer Athletics. The boys’ names have not been released. The boys are now 14; Harris would have been between 19 and 20 at the time the events occurred between December 2018 and March of this year.

“We are grateful that the U.S. Attorney and the FBI have taken swift action to protect children by investigating, arresting, and charging Jerry Harris,” their attorneys, Morgan Stewart and Sarah Klein, said in a statement.

“This was made possible because our clients’ mother had the courage to report Harris to the FBI as well as the Fort Worth Police Department and provided evidentiary proof of the manipulation, sexual harassment, abuse, and exploitation that her sons had suffered. We urge the authorities to undertake a thorough investigation of the United States All Star Federation, Varsity Spirit, and Cheer Athletics to determine which of their executives, employees, and representatives could have stopped Harris’ abuse and failed to do so.”

Varsity, a large private company heavily involved in the cheerleading industry in every facet from clothing to competitions, was also involved in spurring the investigation when the company notified Florida and Texas police of “inappropriate sexual conduct” allegations against Harris in an Aug. 1 letter obtained by USA Today. Reps for Varsity did not immediately respond to comment requests Thursday on Harris’s arrest.

Harris was launched to stardom after “Cheer” premiered on Netflix on Jan. 8. He has not posted on Instagram, where he has 1.2 million followers, since Sept. 4. The cheerleader is known for his signature “mat talk,” which involves shouting praises at his teammates to encourage them during practice.

Since his star-making role on “Cheer,” Harris has enjoyed crossover success in Hollywood. He’s done mat talk on stage with Oprah Winfrey, interviewed celebrities on the Oscars red carpet for “The Ellen DeGeneres Show,” and even appeared in an Instagram video with Joe Biden in support of his presidential campaign.