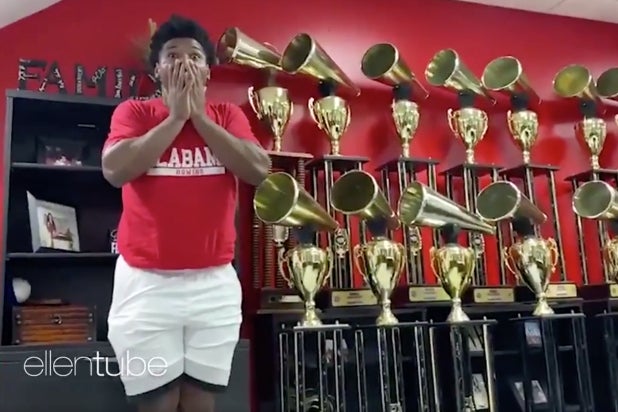 Jerry Harris, one of the stars of Netflix’s “Cheer” docuseries, will be the red carpet correspondent at the 92nd annual Oscars for “The Ellen DeGeneres Show.” Harris received the news a couple of weeks ago, according to a tweet from one of Ellen’s accounts.

Harris’ reaction to the news was just as pure and charming as fans of his from “Cheer” have come to expect. He recently signed with United Talent Agency.

We told @Jerry_K2TR from #CheerNetflix that he was going to be our red carpet correspondent at the #Oscars. His reaction was priceless. pic.twitter.com/ynetzhSwRQ

“Cheer” follows the Navarro College cheerleading team in the sleepy town of Corsicana, Texas, where they spend a semester training as hard as humanly possible for the National Championships in Daytona, Florida. The team is lead by inexhaustible coach Monica Aldama, whose leadership has seen them win 13 titles since 2000.

Harris is a member of the Navarro College cheerleading team and quickly became a favorite of fans of the show for his infectious enthusiasm and positivity and “mat talking,” encouraging his teammates from the side of the mat where the cheerleaders do stunts.

“I want to thank you all so much for all of the love and support you have shown me. I never in a million years thought that I would get this kind of attention, especially from people outside the cheer world,” Harris wrote in an Instagram post last month. “Since CHEER came out, several people have reached out asking how they could help me… I don’t really have the words to express how thankful I am for all of this and all of you. I have been so blessed in life and I’m so grateful for all of this love.”