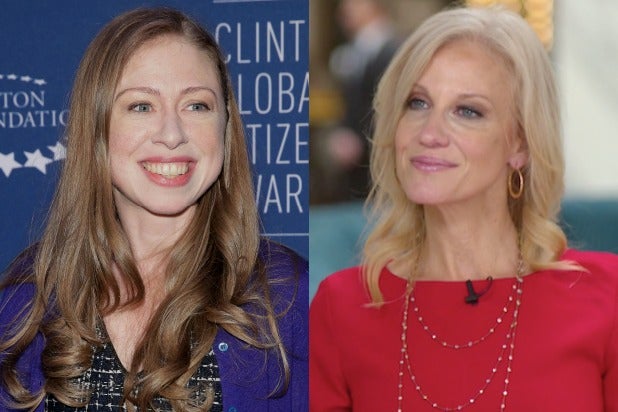 Chelsea Clinton may have zinged Kellyanne Conway after the White House counselor defended President Trump’s travel ban by referencing a nonexistent terror attack she called the “Bowling Green massacre.” But the former First Daughter reached across the aisle on Friday after a Louisiana Congressman made a sexist joke at Conway’s expense.

“I really just want to know what was going on there,” Rep. Cedric Richmond (D-Louisiana) said at the annual Washington Press Club Foundation congressional dinner on Wednesday night. “Because she really looked kind of familiar there in that position there. But don’t answer. And I don’t want you to refer back to the ’90s.”

Richmond was referencing Conway, who became the object of ridicule this week after a photo of her sitting on a couch, apparently checking her phone, as Trump met with HBCU leaders, went viral. She was roundly criticized for everything from her position to perceived disrespect for African American universities. But, as other pictures revealed, Conway was simply taking a photo.

Richmond’s ignorance of context and the implications in his joke caught the attention of Clinton, who slammed the Distinguished Gentleman from Louisiana in no uncertain terms. “Despicable. I hope @KellyannePolls receives the apology she deserves-certainly never thought I’d write that & I mean every word,” Clinton tweeted.

Despicable. I hope @KellyannePolls receives the apology she deserves-certainly never thought I'd write that & I mean every word. https://t.co/NmvFwNL21d

Conway saw Clinton’s posted and responded in kind, writing, “Thank you, @ChelseaClinton. As strong women, as moms to Charlottes…appreciate you speaking out on this.”

Thank you, @ChelseaClinton. As strong women, as moms to Charlottes…appreciate you speaking out on this. https://t.co/rxBnXq553t

For what it’s worth, Richmond did issue an apology. Twitter, however, remained unforgiving and suspicious – not of him, but of Clinton.

“@ChelseaClinton is not trying to help you. She’s trying to help herself and image of her own family,” wrote J.R. McClaren. And Maya Varma wrote, “Never thought I’d write that” makes this a REAL Clinton way of apologizing while meaning the opposite!”

But Lorraine (@Drivnride1Brown) summed it perfectly:

@mskristinawong @KellyannePolls People who can’t accept a kind word or apology frm opposite side; GROW UP Everything isn’t an argument GEEZ