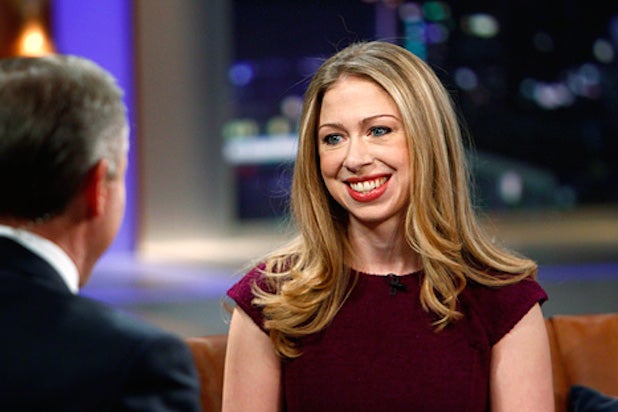 Chelsea Clinton took a shot at Kellyanne Conway by expressing she is grateful that “no one seriously hurt” in the Bowling Green Massacre. “Please don’t make up attacks,” she added.

Conway, who was Donald Trump’s campaign manager when he defeated Chelsea’s mother, Hillary Clinton, in the presidential election, referenced the nonexistent “Bowling Green massacre” during an interview with MSNBC’s “Hardball with Chris Matthews” on Thursday.

Very grateful no one seriously hurt in the Louvre attack …or the (completely fake) Bowling Green Massacre. Please don't make up attacks.

Conway tweeted early Friday morning that she had simply misspoke.

“On @hardball @NBCNews @MSNBC I meant to say “Bowling Green terrorists” as reported here,” she wrote, followed by a link to a 2013 ABC News story about two Iraqi refugees who were arrested in Bowling Green, Kentucky after it was discovered they had been trained by al-Qaeda and had attacked U.S. troops in their home country.

Conway’s statement about Bowling Green came after she was grilled on President Trump’s controversial travel ban.

Clinton wasn’t the only person to have fun at Conway’s expense:

The Bowling Green Massacre was horrific, but not as bad as
the Gotham City Riots.
Thankfully, Batman was able to put a stop to both of them.

I claim 100% responsibility for that 2016 Bowling Green Massacre. pic.twitter.com/HQHe8c1CJK

I'll never forget the eulogy Frederick Douglass gave at the memorial for the victims of the Bowling Green Massacre.

BREAKING- Officer Carl Winslow will be holding a press conference at 12:00pm to release names of victims in the Bowling Green Massacre. pic.twitter.com/6I1tffVYOx

The Bowling Green Massacre is one of the worst attacks in history. Up there with the Narnia shootings and the bombing of Middle Earth.

Finding these Bowling Green Massacre jokes to be a little too soon. Out of respect, we should wait until it takes place.

Here are all the names of the people that perished in the Bowling Green Massacre. May they Rest In Peace pic.twitter.com/vB3k6vNz2y

I was a student at BGSU when the Bowling Green Massacre didn't happen. I'll never be able to not forget what I didn't see that day.????

Pretty sure the Bowling Green Massacre was an XFL team.