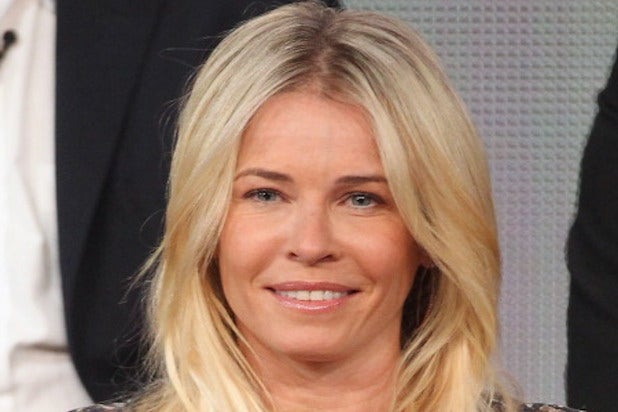 Handler criticized Carter’s story for marginalizing her work as a late night anchor. “How, in this paragraph, could I only be mentioned as an aside?” Handler exclaimed. “Was it because I’m a woman?”

Carter had referenced her in the story saying “(The only female host in late-night is Chelsea Handler, 38, on E!).”

“I obviously didn’t expect or want to be a focal point of the piece,” Handler explained in a Huffington Post Op-Ed. “And I really just appreciated the photo of me at the top of the article placed alongside my late night contemporaries that featured my new haircut — the feedback has been overwhelming. What bothered me was that when I was listed in a paragraph with the late-night hosts, I was the only name put in parentheses.”

Carter told TheWrap there was never any intention to have some kind of comprehensive list of competitors in the text of the piece.

“In putting together the layout they came up with that row of faces and we used a photo of Chelsea along with the others and I hope she noticed it was nicely in the center,” Carter said. “Though I had nothing to do with the placement but that then necessitated including all those folks who were pictured in some way in the text.”

“I suggested the sentence about Chelsea and it was an editing decision to put it in parenthesis,” he added. “I also heard from people for Craig Ferguson and Arsenio who had much better gripes because they got left out altogether and obviously they deserve as much recognition as any of the others. But it was sort of a function of after-the-fact adjustments in the text because of the layout. No slights were intended toward any of these talented people.”

Also read: Chelsea Handler Delves Into Her ‘Ironic’ German-Jewish Roots on TLC’s ‘Who Do You Think You Are?’ (Video)

“I don’t expect everyone to like me or my show, or even watch my show — most nights I’m my harshest critic both professionally and personally,” Handler argued. “And while much of the press has kindly acknowledged my contribution to the late-night landscape I feel over the years, several media outlets have marginalized my presence in the late-night game. I imagined my sustained on-air presence would eventually triumph over any possible gender biases…I’m speaking up with the awareness that some will roll their eyes or dismiss my point. Yet it would be a disservice to all of the hard working women in entertainment, including Joan Rivers, who was the first woman to have her own late night show. Not to mention how this minimizes the efforts of the 100+ staff members who work hard on my show every day.”

A report released this week from the Women’s Media Center showed that women were vastly underrepresented in media, singling out The New York Times for undersourcing women in their stories.