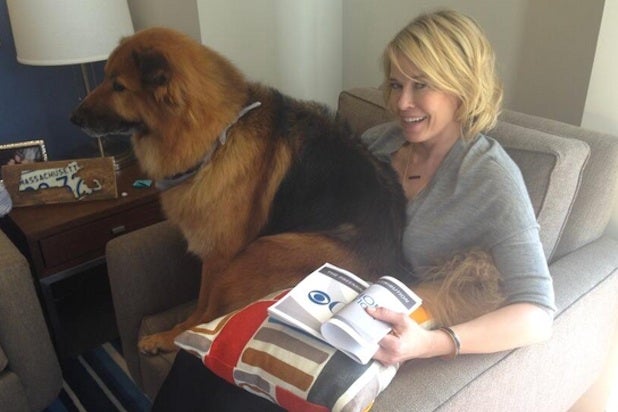 Chelsea Handler is clearly flaunting her talks with CBS after telling E! she isn’t renewing her contract when it expires at the end of 2014.

“Business meeting. Chunk has been acting like this since I started my tour,” she wrote along with a photo of her dog and paperwork bearing the CBS logo on Twitter.

Update: Handler’s manager Irving Azoff denied that the tweeted photo was intentional . “When Chelsea posted the picture she didn’t notice the magazine and it was not a conscious attempt to say she was meeting with CBS,” he told TheWrap, adding, “And I don’t envision her on any broadcast network.”

As TheWrap first reported, Handler was in talks with CBS regarding a syndicated show, though Handler expressed she wasn’t interested in that option. As a result, CBS expressed interest in considering Handler for Craig Ferguson‘s 12:30 a.m. slot.

A network representative denied Handler is up for Ferguson’s slot. “There are no discussions with Chelsea Handler regarding the network’s 12:30 late-night broadcast. Her meeting with CBS yesterday was a general meeting with our syndication,” the representative said.

Update: Azoff  told TheWrap on Monday that “CBS is correct. There are no current conversations about 12.30.” When asked if he had initially been speaking to CBS about the possibility of syndication or a late-night slot, Azoff said: “I had thought we should hear all options. But what she does is not best served on a broadcast network. As we’ve looked at her options, my current opinion is that her creative is not going to work at a broadcast network.”

The individual close to Handler confirmed to TheWrap that Monday’s meeting was about syndication deals.

Handler had intended to aim high and ask CBS to consider her for the 11:30 p.m. slot that David Letterman will vacate in 2015. But earlier this week, CBS named Stephen Colbert as Letterman’s successor.

The insider said that Handler has also been approached by Jeff Zucker for CNN or HLN and by FX. She would also be interested in a Sirius XM radio show that would be taped for Netflix. A Netflix representative has said that the company is not in talks with Handler.

In March, Handler’s fifth book, “Uganda Be Kidding Me,” was released.