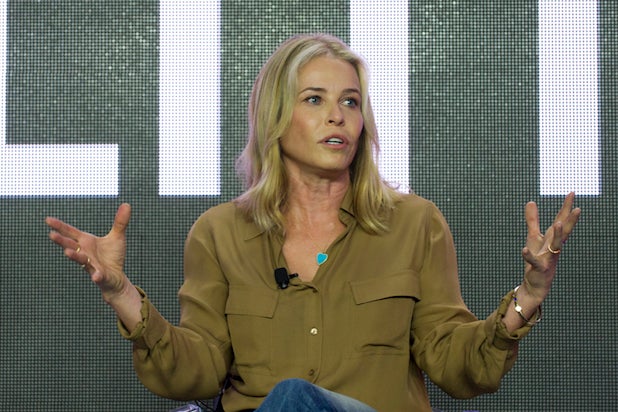 “Did it take courage? I don’t think so. I think that it’s your duty to come forward when somebody treats you like that,” she told TheWrap.

We spoke with the host of Netflix’s “Chelsea” about both Carlson’s lawsuit and a New York Magazine report that Megyn Kelly told investigators that Ailes also sexually harassed her, about a decade ago. Ailes denied the allegations, but resigned after 20 years leading Fox News.

“Especially at the level that they’re at, I think it’s your responsibility,” Handler continued. “They did the right thing and I would expect nothing less. If you’re sticking up for other women that made claims that you know to be true, then yes, it is absolutely your responsibility to confirm that.”

When Handler left E!’s “Chelsea Lately” to launch “Chelsea,” she suddenly became Netflix’s in-house Rachel Maddow. Though most cable new hosts would love to have Donald Trump as a guest, Handler thinks he’s already received enough attention and is supporting Hillary Clinton: “I think right now it’s important to focus on just making sure she gets elected.”

Handler is so pro-Clinton, in fact, that we talked to her in Philadelphia last week before she headed off to the Democratic Convention to attend Clinton’s acceptance speech.

TheWrap: You’ve been very outspoken on politics on “Chelsea.” Did you mask your political views on E!, or is it simply that we’re in an election year?

Handler: I think it’s a combination. I mean, obviously this is an important election as they all are, I think that I’m just in a different space in my life. You grow up and you think about like, ‘OK, can I start to do something a little more meaningful and a little more mindful?’ Luckily, with Netflix it’s such a global audience, they’re in 190 countries, so you can do stuff that is heavier and has a little bit more gravitas.

Let’s talk about the situation at Fox News.

I actually was going to ask about Roger Ailes.

Oh sorry, let’s discuss both. I like the idea of Mr. Ailes potentially joining the Trump campaign, if he hasn’t already. This is the only campaign in politics where they would take someone coming off of a sexual harassment lawsuit who had to step down and hire them for a campaign. Like, that’s the strategy. Let’s get somebody who just had to step down from a 20-year job.

What do you think about Kelly reportedly taking a decade to come forward with a harassment allegation?

Well, you know, better late than never, I guess. It happens in swells with sexual abusers. Look at Bill Cosby, all these women came forward at the same time and it’s sad. If you’re coming up in a job, it’s sad that you don’t feel powerful enough to do that. That’s why when you do have that power, you need to exercise it in a positive way. To support other women is always a priority.

Do you think there will be an evening newscast on Netflix?

Can Netflix revamp the format by hiring a splashy host and releasing a daily newscast that viewers can watch at their leisure?

Maybe that’s what they’re looking for. If there were a place that was going to do it, it would definitely be Netflix. They would come up with a new way to kind of make that hip and cool and more watchable than it is right now. It’s not where people go to get their news anymore.

Megyn Kelly’s contract is up next year…

[Interrupts] Oh, should I hire her as my cleaning lady?

I was going to make a bold prediction that she’ll be the first Netflix evening news host if she leaves Fox.

I’m fine with that. That is a bold prediction, though. Do you want to make a bet?

I’ll tweet you if I’m right. How do you consume news?

From the paper [laughs]. I’m trying to keep something old going.

The New York Times, I don’t like the font of the L.A. Times. It’s large. I read the paper and I obviously go online and read all that stuff. I have a bunch of news roundups I get every morning, like Jason Hirschhorn’s and TheSkimm is a cute little one. I just am interested. It’s easy to stay abreast of things when you’re interested. I don’t have to read gossip anymore. I didn’t even know what happened with Taylor Swift and Kanye the other day, I was so excited.

I assume that would have led the roundtable on your old show.

Right. Somebody brought it up and I had no idea. It was refreshing.

Do you find yourself more in touch with important things going on in the world because of the format of your new show?

Yeah, I just want to be more mindful of the things that are going on around me. I’m 41, so it would be nice to pay attention to things that are outside my actual, natural predilection and open my mind a little bit. But, you know, I’m doing that also in like a backhanded way because it’s fun to ask questions about things you pretend to know about, but you don’t really know about. A lot of us are faking it a lot of the time. People are embarrassed to ask the questions they don’t know the answers to, but I’m not.

OK, you wanted to discus Bill O’Reilly‘s comments that the slaves who built the White House were well-fed?

They were well-fed, I suppose. Not as well fed as our governor from New Jersey.

Do you ever watch Fox News?