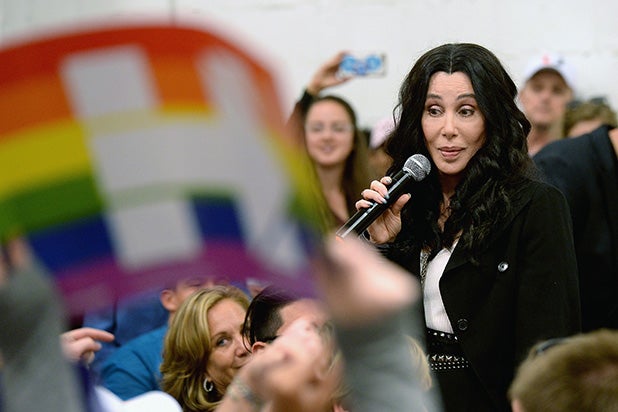 Cher has dropped out of “Flint,” Lifetime’s original movie about recent water crisis, because of family issues, TheWrap has learned.

The Oscar-winner was set to star and executive produce the movie, but announced Friday she would be leaving the project due to family conflicts.

“This has been a project so near and dear to my heart and I was truly looking forward to helping tell this story,” she said in a statement. “Unfortunately I will be unable to leave Los Angeles during the scheduled filming as I am dealing with a serious family issue that prevents me from going on location for the April filming.”

The movie is also being produced by Craig Zadan, Neil Meron, and Katie Couric. “Driving Miss Daisy” director Bruce Beresford was attached to helm the project, which is based on the Feb. 2016 Time Magazine cover story, “The Toxic Tap” by Josh Sanburn.

This was a passion-based project for the singer-actress, who has been outspoken on social media about the crisis, which has been featured prominently in the news since 2014. The city switched water sources in 2014, using the Flint River as a source while a new pipeline was being constructed. The water flowing into the city is polluted and of poor quality, often streaming brown from faucets. It was eventually found that the Flint River water was 19 times more corrosive than Detroit’s water.

In January of last year, Cher stepped up and donated 180,000 bottles to the city.  She was set to play a resident who was affected by the disaster.

“This is a tragedy of staggering proportion and shocking that it’s happening in the middle of our country,” she said.

The movie is set to continue at Lifetime, although no word yet on who will star.

“I’m so glad that Craig and Neil (the producers) plan to move ahead and I know that this Lifetime movie will be done beautifully,” Cher continued in the statement.

If she had remained attached to star, this would’ve been her first acting role in seven years. Her last role was in 2010’s “Burlesque.”