Cher is the hero every DACA Dreamer needs right now. Not only did the pop icon promise to house Dreamers in need, she was a total boss doing it — so said a surge of Twitter observers, at least.

Cher called on other members of Hollywood on Tuesday to help protect Dreamers — those who were brought to the United States as minors from another country that are currently protected under the Deferred Action for Childhood Arrivals (DACA) program — who need help after the Trump administration announced the program will be phased out over the next six months.

“Those Who Can Must Take a DREAMER in2 Their Home & Protect Them !! I’m Ready 2 Do This & [prayer emoji] Others in MY BUSINESS WILL DO THE SAME !! SANCTUARY,” Cher tweeted on Tuesday.

When another Twitter user replied “Sure you will Cher.. I’ll believe it when I see it!” Cher clapped back with the perfect response: “Then keep your eyes open b—-.”

The user has since deleted the tweet, but we all know the internet keeps receipts (see screenshot below). 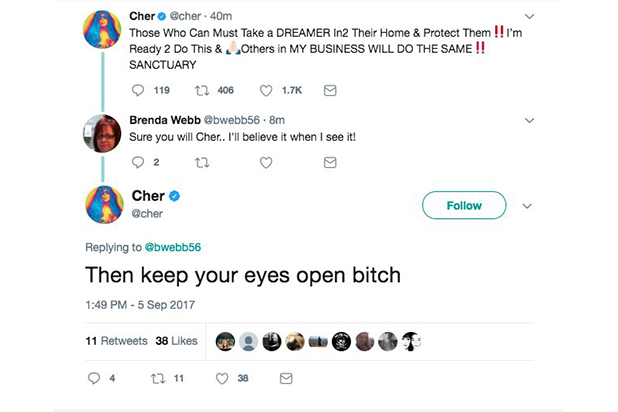 Those Who Can Must Take a DREAMER In2 Their Home & Protect Them‼️I’m Ready 2 Do This & ????????Others in MY BUSINESS WILL DO THE SAME‼️SANCTUARY

Then keep your eyes open bitch

Twitter was quick to applaud Cher for her ferocity, and the reactions are hilarious:

Cher give zero fucks and pulls no punches. pic.twitter.com/gsd6voextr