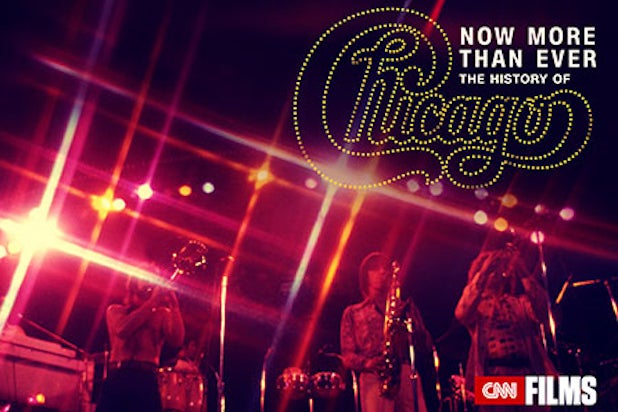 CNN Films will premiere “Now More Than Ever: The History of Chicago” on Sunday, and viewers will see just about every format of film in the documentary reflecting on the band’s 50-year career.

“My cinematographer John Honoré and I decided to utilize every format from 8mm all the way up to modern digital cameras,” Pardini told TheWrap. “This was meant to highlight the different eras of the band and we shot all of the recreation scenes on 35mm and 16mm film with the aid of Panavision’s cameras.”

Chicago was the best-selling American band of the 1970s and remains one of the best-selling bands of all time. In 2017, the band will celebrate 50 years of pop music that includes 36 albums, so CNN Films pulled out all the stops to tell their story.

“The interviews were shot on RED Epic and Arri Alexa and we even shot b-roll on Black Magic 4K,” Pardini explained. “It was important for me as a filmmaker to kind of show off a cinematic style so it wasn’t a basic talking heads documentary. I think it also puts the audience in the context of a film going experience with a story rather than feeling like they’re being told a series of dates and factoids.”

Pardini said, “The movie not only has the history of modern recording in terms of showing music from tape recorders all the way up to digital, but it also shows the breadth of what filmmaking has gone through since 1967.”

The filmmaker even did a voice recording on his iPhone for one of the recreations.

“I know most people won’t notice this as it’s supposed to be a seamless story, but it was still important for me to have an artistic approach to conveying this 50-year journey,” Pardini said.

CNN Worldwide president Jeff Zucker has taken major steps to update the network’s vault with original, evergreen content. “Anthony Bourdain: Parts Unknown,” “Glen Gampbell: I’ll Be Me,” “Finding Jesus,” “High Profits,” “The Eighties,” “Race for the White House,” “United Shades of America” and “The Wonder List with Bill Weir” are among the original content recently produced by the network. Much of the content uses unique and interesting ways to tell its story, including famed filmmaker Philip Bloom’s involvement in “The Wonder List.”

“Now More Than Ever: The History of Chicago” airs on CNN on Sunday, Jan. 1 at 8 p.m. ET with limited commercial interruption.