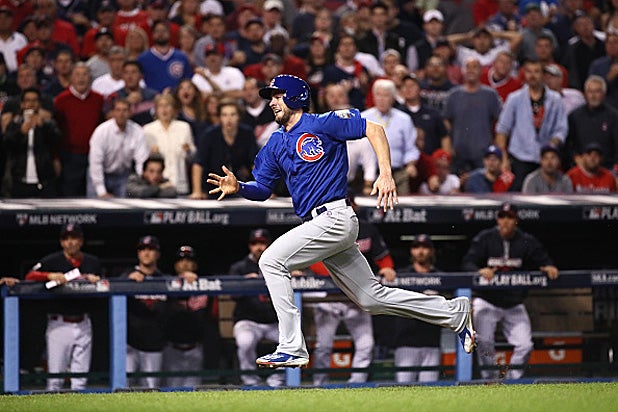 And the curse is officially lifted!

The Chicago Cubs pulled off a historic Game 7 victory over the Cleveland Indians on Wednesday, ending a 108-year drought.

The epic face-off saw the Cubs coming back from being 3-1 games down before they pulled off a Game 5 win in Chicago Sunday night and followed it up taking Game 6 in Cleveland.

It was back and forth all night for Game 7, but in the end Joe Maddon’s team put all the demons to rest with a 8-7 win in the 10th inning.

Having captivated the entire country and delivered impressive ratings for host network Fox, the Cubs now bring the World Series title home to the Windy City for the first time since 1908.

Their win also finally put to rest that pesky smelly Billy Goat who was ejected from Wrigley Field in 1945, prompting his owner to curse the team.

As for the Indians, they were battling a championship drought themselves not having won a World Series for 68 years.

Aside from the first win for the Cubs this century, Wednesday’s Game 7 was packed with firsts during what is already being proclaimed as one of the best World Series games ever.

At 39, David Ross — who made his major league debut for the Los Angeles Dodgers in 2002 — became the oldest player to ever hit a homerun in Game 7 of the World Series. This will also be the last game of his 15-year major league career.

After the Cubs took an early lead and went up 6-3, the Indians then became the first team to ever score a game-tying home run in the eighth inning or later.

And then the came, and a stadium filled with stressed out fans was forced to watch as tarp covered the field. However, after it was all over the Cubs players described it as “the best delay ever” as it gave them chance to regroup and come back fighting.

Ben Zobrist was awarded the MVP after the game, and won a brand new Chevy convertible as an added prize — he’s gonna have to fight Bill Murray for it however, as the actor ran out onto the field and tried to honk the horn while the players were celebrating in the clubhouse.

Famous longsuffering fans of both teams packed Progressive Field in downtown Cleveland, with LeBron James (who went wild in his VIP suite when the Indians scored!), Bill Murray, John Cusack, Charlie Sheen, Eddie Vedder and Billy Corgan of the Smashing Pumpkins all there to cheer on their respective teams.

With the election six days away, even Cubs fan Hillary Clinton was watching the game, tweeting: “They did it! 108 years later and the drought is finally over. Way to make history, @Cubs. #FlyTheW.”

See some of the celebratory tweets below.

They did it! 108 years later and the drought is finally over. Way to make history, @Cubs. #FlyTheW -H

Not since Susan Lucci finally winning her Emmy….. #Cubs

A fantastic game! Both teams have so much heart; don't remember seeing a game like it! Congratulations to the #Cubs! Love the #Indians too!

Please do not cut to elderly Cubs fans in the audience looking tense, it's too much to bear

Never thought I would see the day…especially not after this drama…probably the only way a Game 7 btw these 2 franchises could go!

Wondered if it would be a bad omen for Cubs when I saw "inferno" and the villain's name is Zobrist. Nope, good omen. Ben Zobrist, G7 hero.