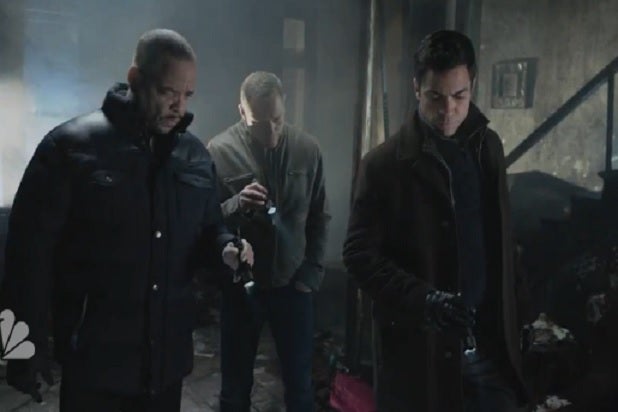 The three-part “Law & Order: SVU,” “Chicago Fire,” Chicago P.D.” crossover event will follow the evil Dr. Yates as he leaves a trail of bodies from Chicago to New York.

In an exclusive clip obtained by TheWrap, detectives Tutuola (Ice T) and Amaro (Danny Pino) travel to the Windy City to help Detective Voight (Jason Beghe) investigate the death  of a young woman in a house fire they believe was set by Yates. They are met on the scene by Fire Chief Boden (Eamonn Walker). Boden is convinced the fire was arson, though he cannot prove it.

In the “SVU” part of the crossover, Benson (Mariska Hargitay) and Voight continue the investigation into a rape and murder that is very similar to a case Benson worked with Stabler (Christopher Meloni) years earlier. The Chicago team joins the SVU squad in New York to pursue Yates after they’re forced to let him go in Chicago.

See Photos: 18 Real-Life Scandals That TV Ripped From the Headlines