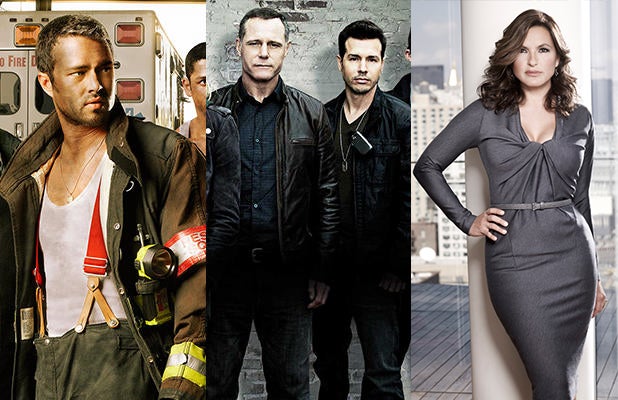 NBC is taking the crossover concept into new territory with a mega-event of three signature dramas.

The groundbreaking crossover — timed for the November sweep — centers on a child pornography ring that brings the cops, firefighters and district attorneys of three Dick Wolf procedurals together. It kicks off Tuesday night on “Chicago Fire” and continues Wednesday with “Law & Order: SVU” and “Chicago P.D.”

“It invariably raises interest in all of the shows,” “Fire” and “P.D.” Executive Producer Matt Olmstead told TheWrap. Olmstead also mentioned he couldn’t recall ever seeing a three-show crossover before.

The sequential nature of the participating series’ regular weekly schedule determined the natural order of the lineup, and thus, the story. While Olmstead’s two shows have the coveted bookend slots, he promised “SVU’s” turn would not feel like “middle relief,” and would contain payoffs of its own.

Practically speaking, viewers in for the long-haul — or really, the medium haul in this case — will have to endure some necessary character exposition to help weave the story through three episodes across three different series. While that can feel awkward, it is not the only risky move in a play.

To mitigate possible over-saturation, Olmstead insisted that his team be vigilant towards not making the crossovers feel like “schtick,” though he acknowledged, “How often does a Special Victims Unit in New York need to come over and help out the police department in Chicago?”

Still, he added, “I think people do — not so much look the other way — but they’re willing to … suspend their disbelief a little bit because there’s something about the freshness and the newness of seeing characters from one show interact with the characters that they know from another show.”

Forgetting those viewers for just a second, another benefit that Olmstead didn’t realize he’d see is exactly how much the undertaking would invigorate his overworked actors, especially the young ones who got to observe the veterans.

And the intangible benefits didn’t stop with just takeaways for the cast.

“It really was a nice boost for the crew, the actors, especially going into a Chicago winter, when you can use all of the wind in your sails you can get,” Olmstead said.

“It was a lot of logistics … but it was just worth it,” he added. “Sometimes bigger is better.”

Despite how the two-night event does — or possibly because of it, should the run be a hit — viewers can expect a lot more “P.D.” and “Fire” crossovers, Olmstead said, citing the natural trickle-down between the two professions. Plus, there is the matter of those logistics again: The two Chicago shows are on the same soundstage and the production offices are in the same building.

Also read: ‘Hunger Games’ Star Woody Harrelson Gets Shot Up, Felt Up and Fed Up in ‘SNL’ Promos (Video)

Olmstead also admitted there could even be permanent cast swaps.

“There is kind of a cross-pollination there, so it’s not out of the question,” he said when we asked about a possible casting coup. “So, we definitely explored it and we may pull the trigger on it someday.”

In TV land, however, in terms of taking on another three-way crossover, Olmstead concluded, “I’m confident we can get another story that could be up and running — I had a great time doing it.”