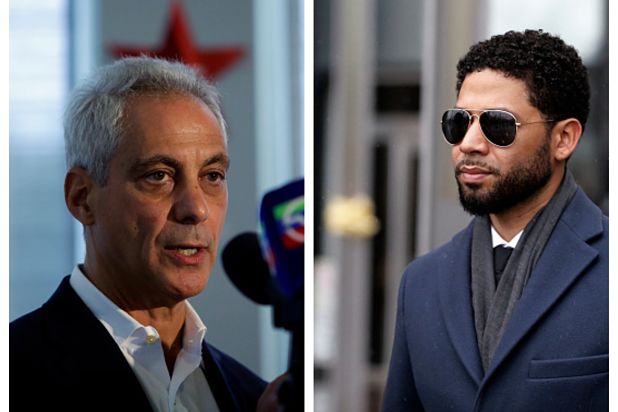 “This is a whitewash of justice,” Emanuel said Tuesday afternoon during a fiery press conference alongside Chicago police superintendent Eddie Johnson. “A grand jury could not have been clearer.”

In a stunning reversal, all charges were dropped against Smollett Tuesday morning by the Cook County State’s Attorney’s Office. The “Empire” star was indicted on 16 felony counts of disorderly conduct earlier this month. He was accused of lying to police regarding a Jan. 29 incident, in which he said he was randomly attacked by two men shouting racial and homophobic slurs in his Chicago neighborhood.

Johnson also heavily criticized the decision: “Do I think justice was served? No,” he said, adding that he stands behind the work of the detectives. “I’ve heard that they wanted their day in court with TV cameras so America could know the truth. But no, they chose to hide behind secrecy and broker a deal to circumvent the judicial system … I stand behind the detectives’ investigation.”

Smollett’s attorney Patricia Brown Holmes said during an earlier press conference Tuesday “there was no deal” to get the charges dropped, saying, “The state dismissed the charges.” Smollett spoke shortly after Holmes, reiterating that he has been “truthful and consistent on every level since day one. I would not be my mother’s son if I was capable of one drop of what I’ve been accused of.”

In a statement on twitter, Anthony Guglielmi, the chief communications officer for the Chicago Police, added: “Chicago police detectives did an excellent investigation and their work was reaffirmed by an independent grand jury who brought 16 criminal counts. In our experience, innocent individuals don’t forget [sic] bond & perform community service in exchange for dropped charges.”

“After reviewing all of the facts and circumstances of the case, including Mr. Smollett’s volunteer service in the community and agreement to forfeit his bond to the City of Chicago, we believe this outcome is a just disposition and appropriate resolution to this case,” the State’s Attorney’s Office said of its decision.

Emanuel, frequently pointing his finger at the cameras and raising his voice, argued the grand jury’s decision was reason for going forward with the case against Smollett. He pointed out that the grand jury handed out those indictments “based on only a piece of the evidence that the police had collected,” and added that $10,000 that Smollett is forfeiting “doesn’t even come close to what the city spent in resources.”

Both Emanuel and Johnson remained adamant that Smollett committed a hoax by falsely reporting a hate crime.

“If he wanted to clear his name the way to do that was in a court of law so that everyone could see the evidence,” said Johnson. Added Emanuel: “Mr. Smollett is still saying that he is innocent, still running down the Chicago Police department. How dare him. How dare him. After everybody saw – and I want to remind you, this is not the Superintendent’s word against his – a grand jury, a sliver of the evidence, and they came to a conclusion. As did the State’s Attorney’s office.”

Emanuel also condemned the justice system at large, saying the decision “sends a clear message that if you’re in a position of influence and power you’ll get treated one way, other people will get treated another way. There is no accountability, then, in the system. It is wrong. Full stop.”

He ended by going after Smollett again, saying that his comments earlier on Tuesday prove he “still no sense of ownership of what he’s done. This a person, now, who has been let off scot-free, with no sense of accountability of the moral and ethical wrong of his actions.”

The “Empire” star — who plays the openly gay Jamal Lyon on the Fox hip-hop soap — was originally charged with one felony count for filing a false police report last month. Smollett and his attorneys continuously denied any wrongdoing throughout the criminal proceedings, as police accused the actor of staging the attack himself.

Smollett appeared in court on March 14 to plead not guilty to 16 counts of disorderly conduct after being accused of lying to police regarding a Jan. 29 incident, in which he said he was randomly attacked by two men shouting racial and homophobic slurs in his Chicago neighborhood. “Empire” studio 20th Century Fox TV said in a statement of its own on Tuesday: “Jussie Smollett has always maintained his innocence and we are gratified that all charges against him have been dismissed.”