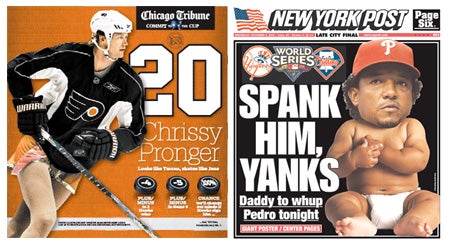 For the vast majority of that Americans that don’t know and/or care about hockey, the Stanley Cup Playoffs between the Chicago Blackhawks and Philadelphia Flyers is headed to a Game 6, with Chicago up three games to two in the best-of-seven series.

Continuing the rich tradition of sports newsprint trash talk, the Chicago Tribune on Tuesday printed a poster depicting the Flyers’ Chris Pronger as “Chrissy Pronger,” a female figure skater in a pink-and-orange ballerina outfit. (In small print, the Tribune wrote: "Looks like Tarzan, skates like Jane.")

Most Hawks fans probably found it amusing, though as Poynter points out, not necessarily Tribune readers. One reader called the stunt “just dumb.”

This is horrible act by the Tribune. [Whoever] approved it should be fired. I am a Blackhawks fan and dislike Pronger as much as the next guy, but there is no place in sports for crap like this.

Can’t stand Pronger, but this poster is sexist. [I]t’s insulting to women and girls.

The Tribune should’ve followed a cue from the New York Post, which during the World Series last October printed a poster featuring Phillies starter Pedro Martinez as a baby under the familiar Yankees-fan chant “Who’s Your Daddy?” that dates back to Martinez’s stint with the Boston Red Sox.

At least in that case, the taunt was anchored in reality – Martinez once called the Yankees his “Daddy” after a loss.

With “Chrissy,” the Tribune missed a power play opportunity.