Chick Vennera, best known for his fan-favorite role as Enrique Mas in “The Golden Girls” and as the Leatherman in the 1978 film “Thank God It’s Friday,” died from cancer Wednesday. He was 74 years old.

The actor made his television debut as a vocal talent on the classic Space Age cartoon series “The Jetsons” and went on to not only star alongside Betty White in “The Golden Girls” and perform dance routines atop several cars for his big-screen debut, but venture into voice acting as well. His most notable role was as Pesto in the hit, Emmy-winning animated series, “Animaniacs.” He also voiced characters for Batman Beyond and several other series.

Born in Herkimer, New York, Vennera moved to California after high school to study acting at the Pasadena Playhouse, and then, after enlisting in the Army and returning to civilian life, entered the world of Broadway and TV with appearances on “Baretta” and “The Blue Knight.” 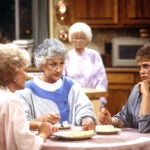 Also Read:
See Inside the ‘Golden Girls’ House on Sale for $3 Million – Wicker Not Included

In 2009, the actor launched his own performance-arts school.

Vennera is survived by his daughter Nicky Vennera and wife Susan Vennera.

Vennera’s death was confirmed by his daughter to Deadline.