The house from “The Golden Girls” is up for sale, waiting to hold all the wicker furniture of your dreams.

The four-bedroom house in Los Angeles’ Brentwood neighborhood is up for sale with a price tag of $2.999 million following the deaths of the owners.

The exterior of the 1950s-era house was used for establishing shots of the house shared by Blanche (Rue McClanahan), Dorothy (Bea Arthur), Sophia (Estelle Getty) and Rose (Betty White) on the NBC sitcom throughout its first season. It was later replicated on a studio backlot for subsequent seasons. 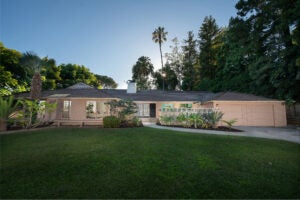 The original owners’ son, James C. Barry, told the Wall Street Journal that his parents agreed to have their home featured on the series because of their passion for architecture and design, though they didn’t watch the show themselves. The house was scouted for the series because of its greenery — exotic plans installed by his father, which gave the property an aesthetic more consistent with the show’s Miami setting. 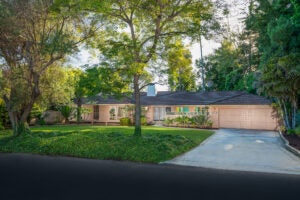 The real-life abode embraces what realty firm Douglas Elliman describes as “unique and timeless Japanese/Hawaiian style.” Natural light floods in from the giant windows and fills the rooms, which feature high-beam ceilings.

However, unlike its fictitious interior, there is no wicker furniture or pastel pink hues to be seen. 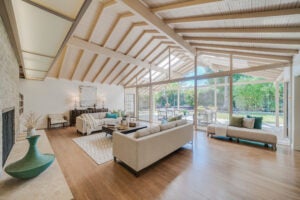 This home isn’t the only famous house to go up on the market. Back in 2018, HGTV won a high-profile bidding war for the Studio City house used for exterior shots on “The Brady Bunch,” beating out Lance Bass with an offer well over the asking price of $1.885 million.

That house was later featured on the networks “A Very Brady Renovation,” which reunited all of the show’s former child stars to transform the interior of the home to match the sets used for the show.

As you might expect, the ”Property Brothers“ are all over this thing