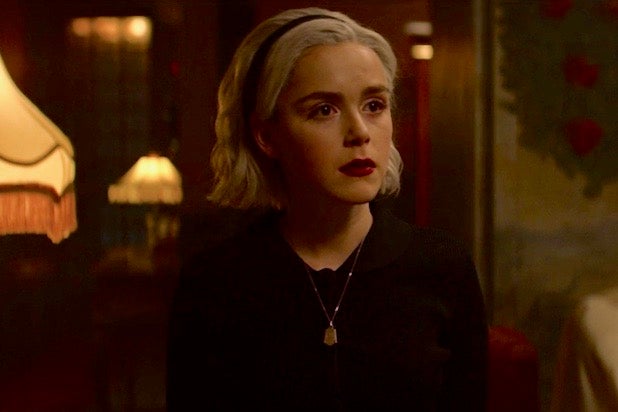 (Warning: This post contains spoilers from “Chilling Adventures of Sabrina: A Midwinter’s Tale”)

Sabrina Spellman is having a blue Christmas and most likely an even darker New Year.

“Chilling Adventures of Sabrina: A Midwinter’s Tale” launched Friday on Netflix, bringing fans back into the world of Kiernan Shipka’s teen witch for a special holiday installment before the series officially returns with its second season next April.

Also Read: 'Chilling Adventures of Sabrina': That Christmas Ghost Story Was Originally Planned for the Pilot

In the closing moments of the 55-minute episode, Sabrina (Shipka) and her family are gathered around the fire after going through a rather crazy Winter Solstice that left our heroine further-parted from Harvey (Ross Lynch). It also left her missing her dead parents more than ever after she summoned Diana, her ghost mother, for advice.

Just as the Spellmans are settling down to listen to Ambrose read “A Christmas Carol,” we cut to three demonic-looking men coming out of the Greendale mines, bearing gifts that we can safely assume are not gold, frankincense and myrrh for a newborn king.

“They’re definitely a threat and, you know, this episode is set at Christmastime and the Winter Solstice,” series creator Roberto Aguirre-Sacasa told TheWrap. “There is a great tradition, obviously, of the Three Wise Men and the Epiphany. So that might be what’s coming down the pike for Sabrina and the Spellmans.”

Also Read: 'Chilling Adventures of Sabrina': Here's How They Turned the Holiday Episode Around So Quickly

Aguirre-Sacasa explained to TheWrap how he rearranged the show’s production schedule for Part 2 to make “A Midwinter’s Tale” work as a standalone installment, even though it had not originally been planned out that way, that will also lead us into the next part of the story.

“Yeah, the episode that will kick off Part 2, we had written that as a premiere episode for the second part, so that’s what it very much feels like,” Aguirre-Sacasa said. “And that’ll really launch us out in a really full-blooded, muscular way and is filled with revelations. Really big, big stories start in that episode.”

TheWrap spoke with the showrunner just as “Sabrina” was in the midst of shooting its Season 2 finale this week, and he’s “really, really, really excited about people seeing it.”

Read more from our interview with Aguirre-Sacasa about “A Midwinter’s Tale” here.

“Chilling Adventures of Sabrina: A Midwinter’s Tale” is now streaming on Netflix.