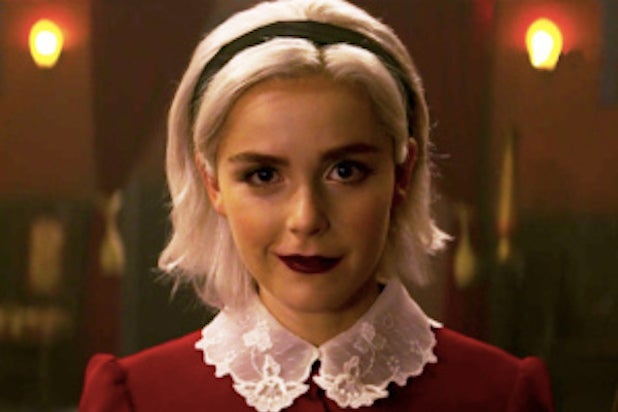 (Warning: Major spoilers ahead for the finale of Season 1 of Netflix’s “Chilling Adventures of Sabrina.”)

Meet the new Sabrina Spellman — and her killer dye job.

The finale for the first season of Netflix’s “Chilling Adventures of Sabrina” — titled “The Witching Hour” — did a fantastic job of both tying up multiple loose ends and leaving several wandering threads to be followed in the next installment.

So get out your magic workbooks because TheWrap is going to break it all down for you.

The beginning of the end came when Sabrina (Kiernan Shipka) was finally forced to (officially) sign her name in the Book of the Beast to help her gain the power she needed to vanquish the spirits of the Thirteen with hellfire and save the town of Greendale. And with a little coaxing from Miss Wardwell (Michelle Gomez), she finally put blood to paper.

(Oh, and that’s when her hair locks turned a striking platinum blonde. See above.)

Lady Blackwell gave birth to twins, one of which Zelda hid away after Lord Blackwell’s wife died in labor. Having delivered the baby, Zelda (Miranda Otto) feared that the infant (a girl) would be in danger, as she was born before her brother, who is being hailed as the Blackwells’ rightful heir.

As for Aunt Hilda (Lucy Davis)? Well, it looks like her boyfriend might be a demon. But we’ll put a pin in that for now.

After everything calmed down in the neighborhood, Sabrina realized her life would never be the same now that she’d given it over to the Dark Lord, so she dumped her high school sweetie Harvey Kinkle (Ross Lynch) for his own protection.

But the biggest twist came in the final moments of the finale, when Miss Wardwell revealed she is, in fact, Madam Satan, aka Adam’s first wife Lilith, aka the woman who wants to reign at the Dark Lord’s side.

Now she’s hellbent on grooming Sabrina to take her place as Satan’s foot soldier so she can rise to power, and she certainly doesn’t like the suggestion the teen witch could actually take her place. (Her poor familiar, Stolas, learned that the hard way…)

Also Read: 'Chilling Adventures of Sabrina' Star Tati Gabrielle Was Just as Scared Filming as You Are Watching

Principal Hawthorne — who had been Wardwell’s captive this entire episode — was pretty freaked while listening to her tale. Especially when she pulled off her face to show what lies beneath. Gah.

The season ended with Sabrina fully embracing her wicked side and strolling up to Nicholas Scratch (Gavin Leatherwood), along with Prudence (Tati Gabrielle) and the other Weird Sisters.

“Chilling Adventures of Sabrina” Season 1 is currently streaming on Netflix.