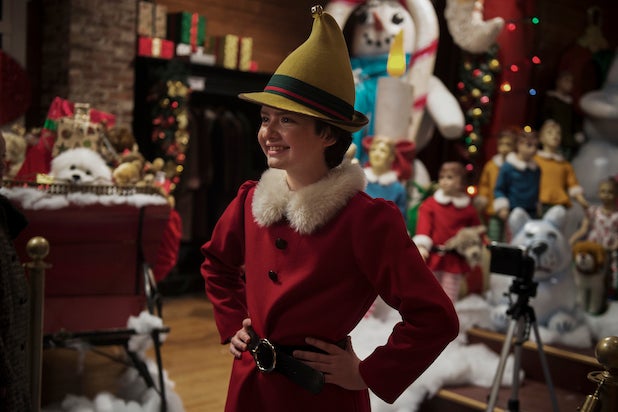 (Warning: This post contains spoilers for “Chilling Adventures of Sabrina: A Midwinter’s Tale”)

We have good news and bad news for all you “Riverdale” and “Chilling Adventures of Sabrina” fans hoping for a crossover.

The good: The “Sabrina” holiday episode, “A Midwinter’s Tale,” does feature an Archie Comics reference. The bad: It’s not a direct shout-out to The CW series set in the same universe as Netflix’s dark take on the teen witch.

“The biggest reference isn’t really a ‘Riverdale’ reference, but it is an Archie Comics reference,” Roberto Aguirre-Sacasa, Chief Creative Officer at Archie Comics and the showrunner on both The CW’s “Riverdale” and Netflix’s “Sabrina,” told TheWrap in an interview ahead of the holiday episode’s launch on Friday.

“Susie [played by Lachlan Watson] is dressed up as a Christmas elf called Jingles,” Aguirre-Sacasa says. “And Jingles the Christmas Elf is an actual Archie Comics character who appears in Riverdale every Christmas to have mischief with the kids. So I’ve been wanting to tell a Jingles the Christmas Elf story for a long, long time. So it’s not from ‘Riverdale’ the TV show, but it is from the Archie comic books.”

And Sabrina’s (Kiernan Shipka) friend is pretty stoked about the gig they have working as an elf assistant to a mall Santa, played by the grumpy Mr. Bartell. Well, that is until Susie finds out he’s actually a demon who turns children into life-size figurines and is coming for them, too.

You can read more from our interview with Aguirre-Sacasa about “A Midwinter’s Tale” here and here.

And if you are looking for a status update on the chances “Riverdale” and “Sabrina” will crossover anytime soon, you can find Roberto’s answer to that question here.

“Chilling Adventures of Sabrina: A Midwinter’s Tale” is now streaming on Netflix.