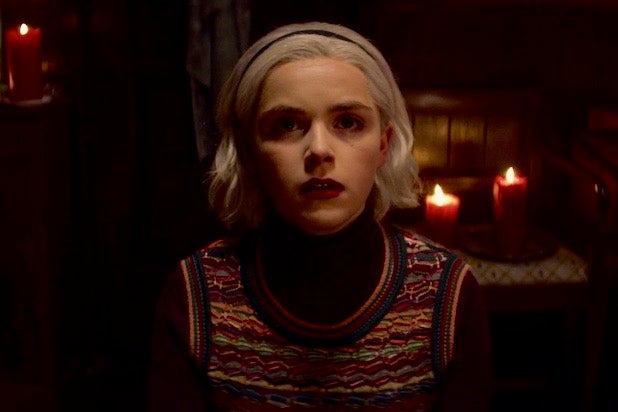 (Warning: This post contains spoilers for “Chilling Adventures of Sabrina: A Midwinter’s Tale”)

“Chilling Adventures of Sabrina: A Midwinter’s Tale” is filled with family drama — just as any good holiday story should be. And the central event that kicks off the special installment’s conflicts — a seance Kiernan Shipka’s Sabrina conducts to summon her dead mother, Diane — is actually a plot point they’ve been trying to do since before the first season launched in October.

“That’s another thing that I’ve wanted to do from the start,” “Sabrina” creator Roberto Aguirre-Sacasa told TheWrap in an interview ahead of the holiday episode’s launch Friday. “In the original outline for the pilot, Sabrina was going to try to contact her mother to ask about going down the Path of Night versus the Path of Light. And then we kept putting it off and putting it off. And then, you know, there is a great tradition of ghosts obviously during the holidays and there is a very big tradition of seances happening during the holidays, so it felt like, ‘Oh, good, we can finally tell that story.’ So that’s where it came from!”

The primary reason our teen witch enlists Prudence and the Weird Sisters to help her summon her deceased mother in a ritual using her mom’s wedding dress is to find out why Diana is trapped in limbo — and to get some advice about her on-hold relationship with mortal Harvey.

And Roberto says that while “the Harvey-Sabrina relationship is something we’re still exploring very much” when “Chilling Adventures of Sabrina” Part 2 arrives in April, “it’s very different from Season 1.”

Aguirre-Sacasa told TheWrap we will also dive into the mystery surrounding the deaths of Diana and Sabrina’s father Edward, a High Priest in the Church of Night, who were supposedly killed in a plane crash when she was a baby.

“You will definitely learn much more about Sabrina’s parents and Sabrina’s parents’ relationship with Aunt Hilda and Aunt Zelda in the second half of the season. Absolutely,” he says. “That will sort of be one of the mysteries we’re always dealing with.”

Read more from our interview with Aguirre-Sacasa here.

“Chilling Adventures of Sabrina: A Midwinter’s Tale” is streaming now on Netflix.