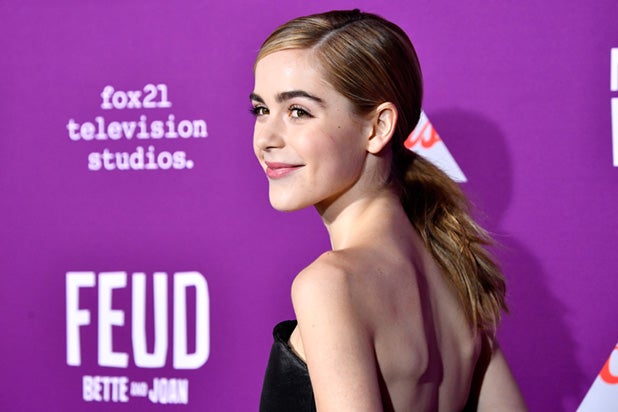 We still don’t know too much about Netflix’s “Chilling Adventures of Sabrina” series, but the first poster for the project just dropped and it’s reminding us how excited we are for the comics-based series.

Showrunner Roberto Aguirre-Sacasa (who’s also the Chief Creative Officer at Archie Comics and the showrunner of The CW series “Riverdale”) tweeted out the poster, which features an outline of Sabrina and her feline friend Salem.

Aguirre-Sacasa has been leaving fans little crumbs throughout the production process. Last week, he shared a photo at the table read for Episode 9, including Ross Lynch, who plays Sabrina (Kiernan Shipka)’s boyfriend Harvey, and with co-star Chance Perdomo, who plays Sabrina’s cousin Ambrose.

He also previously shared a photo of Lynch and Shipka on set as the teen couple, and of course, before that, a photo of Salem himself.

See the poster (which will also be featured on Warner Bros. TV bags at San Diego Comic-Con this year) below.

The cat's out of the bag! Official CHILLING ADVENTURES OF SABRINA bag for Comic-Con 2018. ???? #WBSDCC #SDCC2018 pic.twitter.com/kHiCBDAze3