(Warning: This post contains spoilers for Episode 106 of “The Chilling Adventures of Sabrina.”)

When Netflix compared “Chilling Adventures of Sabrina” to “The Exorcist” in the reboot’s logline, they were not messing around.

“An Exorcism in Greendale” — Episode 6 of the new take on the Archie Comics teen witch — is actually a tribute to the 1973 horror flick, with the 16-year-old Sabrina Spellman (Kiernan Shipka) performing an (unauthorized) exorcism of her own to free a man’s soul.

Of course, if you’ve been eating up every piece of news about this show since before its Friday launch, then you already knew that, as creator Roberto Aguirre-Sacasa teased the “homage” episode in an interview with Entertainment Weekly in August.

But now that it’s arrived, TheWrap can finally call out all the references to one of the showrunner’s “favorite movies” that pop up in the sixth installment of Season 1.

And, yeah, there are enough to make your head spin.

1. No one is on board with this exorcism

When Sabrina tries to get the ball rolling on an exorcism to free her friend Susie’s uncle Jesse, she doesn’t really have any advocates. That’s not unlike actress Chris MacNeil’s (played by Ellen Burstyn) problem in “The Exorcist,” in which her 12-year-old daughter Regan is possessed by a demon, and she can’t seem to get anyone to agree to an exorcism until the very end. But because of how rarely the practice is actually invoked within the Catholic church, it’s not surprising that Father Merrin and Father Karras don’t wanna mess around unless it’s a last resort — or that Sabrina’s aunts and Father Blackwood don’t want a teen witch playing with that “false” church’s magic.

A rotting, contorted face on a bed-ridden demon with a foaming mouth? Yeah, Regan and Jesse definitely have that in common. Though the malevolence inside Regan is never named on screen in “The Exorcist,” it is canonically known as Pazuzu. The evil being on “Sabrina” is known as Maereci at first — until we find out that was a little trickier (“Ice cream” spelled backward. Sigh) — and then Apophis. Both Pazuzu and Apophis are references to actual demons in mythology.

Well, Jesse Putnam certainly gave Linda Blair a run for her money in expletive-laced insults. Though, you know, no F-bombs. So young Regan still wins.

Literally, how could you do a “The Exorcist” tribute without making sure that someone pukes across the room and heads roll? Right, you couldn’t. Only on “Sabrina,” it’s more a continuous jerking of the demon’s head and unnatural movements rather than a full 360 turn. But we’ll allow it.

Also Read: Kiernan Shipka and Ross Lynch Are in Love With Sabrina and Harvey's Love

Sabrina’s takes a little trip down into the mines — the place where Jesse used to work and supposedly saw something that made him go mad — with Harvey. There she finds a broken tablet that gives her a clue to the demon’s name (and thus how to defeat him). That moment is a clear shoutout to the beginning of “The Exorcist,” as in the opening scene for the horror flick, Father Merrin is on an archeological dig in Iraq and finds an amulet resembling Pazuzu, which sets the whole plot in motion.

One of the most iconic moments from “The Exorcist” is the scene in which the priests roll up to the house late at night, with a bright white light shining from Regan’s bedroom. “Sabrina” doesn’t miss a bit, using a similar shot of Sabrina and her Aunt Hilda and Miss Wardwell (aka Madam Satan) walking toward the Putnams’ house to free Uncle Jesse. (See it pictured above.)

Also Read: 'Chilling Adventures of Sabrina' Star Tati Gabrielle Was Just as Scared Filming as You Are Watching 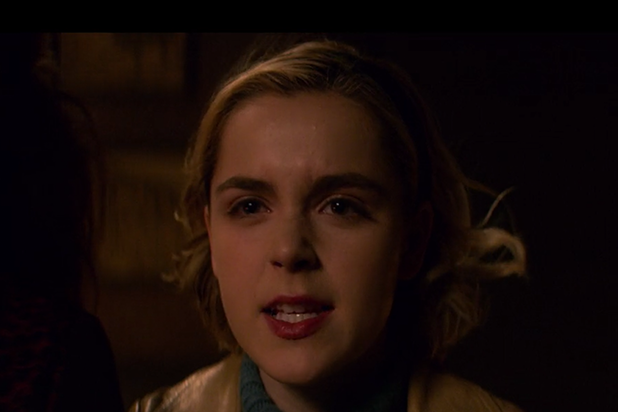 Apophis does his worst to mock Sabrina and her team while they try to expel the demon from Susie’s uncle’s body. But she hangs tough, letting the power of the witches who came before her cleanse the man’s soul. Oh, and Aunt Zelda comes in at the last minute to assist, possibly a nod to Father Karras’ return at the end of “The Exorcist” and the reason Regan is ultimately saved.

Now the biggest difference between Sabrina’s exorcism and Father Merrin and Father Karras’ act (other than the fact the teen witch’s was not a Catholic exorcism) is that Regan lived and Jesse died — but that’s only because Madam Satan came to kill the cleansed uncle after Sabrina saved him. (Still unclear on exactly why she did that, by the way.)

Oh, and Sabrina survived enacting the exorcism. Merrin and Karras? Not so much. RIP, padres.

“Chilling Adventures of Sabrina” Season 1 is now streaming on Netflix.