(Warning: This post contains spoilers for the final season of “Chilling Adventures of Sabrina” through Episode 7.)

Netflix’s horror-drama “Chilling Adventures of Sabrina” gave a big shoutout to ABC’s ’90s sitcom “Sabrina the Teenage Witch” in its recently launched final season with the cameos for Caroline Rhea and Beth Broderick. Or, as fans of the Melissa Joan Hart-led comedy remember them, Aunt Hilda and Aunt Zelda.

The “Sabrina”-“Sabrina” crossover event comes in the Roberto Aguirre-Sacasa-created series’ penultimate episode, when Sabrina Morningstar (played by Kiernan Shipka) enters the “Other Cosmos” in hopes of saving Sabrina Spellman (also Shipka) and the rest of her loved ones from the Eldritch Terrors. It’s here, in this alternate reality, she finds herself the star of a long-running TV series, with her aunties played by Broderick and Rhea, and her *real* Aunt Zelda and Hilda (played by Miranda Otto and Lucy Davis, respectively) are their understudies.

“I feel like we could not wrap it out without paying homage to ‘Sabrina the Teenage Witch,'” Shipka told TheWrap. “And we had been wanting to feature the aunts or do sort of a sitcom-esque episode for quite some time — actually, since Season 1. And it didn’t quite pan out then, and I’m really glad that it didn’t, because it felt so earned and so fun to do during this last season.”

Earlier in the season, when Sabrina Morningstar first crosses into the “Other Cosmos,” fans get a brief glimpse of Rhea and Broderick, which Shipka says was not included in the original script because they hadn’t confirmed their appearances yet.

“And then it was getting around set, everyone was talking about it. There was like a little rumor going on throughout the set whether they were going to do it or not. And once they came on, Oh my God, everyone was overjoyed. It was so fun. One of my favorite episodes to ever shoot. They were so wonderful and it just felt so right.” 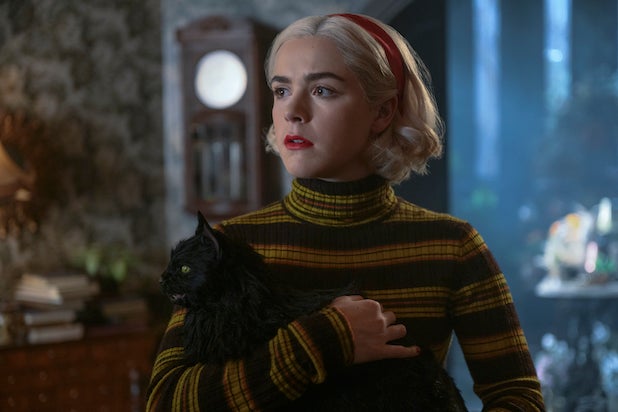 This special episode of “Chilling Adventures of Sabrina” gives even more of a shoutout to “Sabrina the Teenage Witch” when you find out Salem talks here, just like he did in Hart’s show when he was voiced by Nick Bakay. But this Salem — who turns out to be the Eldritch Terror known as The Endless — is voiced by Luke Cook, who plays Lucifer.

Shipka isn’t sure if Bakay or Hart were asked to join the episode in some form as well, but knows how important Sabrina’s aunts were to the final season’s overall story.

“I don’t know the behind-the-scenes back-and-forth of what happened there,” she said. “I think that we knew we wanted a talking Salem and obviously the aunts represented this other element of the Eldritch Terrors which played into the storyline quite nicely, so that’s what we went with.”

Oh, right, Sabrina’s aunties turn out to have an even scarier secret identity than Salem, when we learn they are minions of The Void, the biggest, baddest Eldritch Terror of them all.

Check back with TheWrap for more of our coverage of the final season of “Chilling Adventures of Sabrina.”