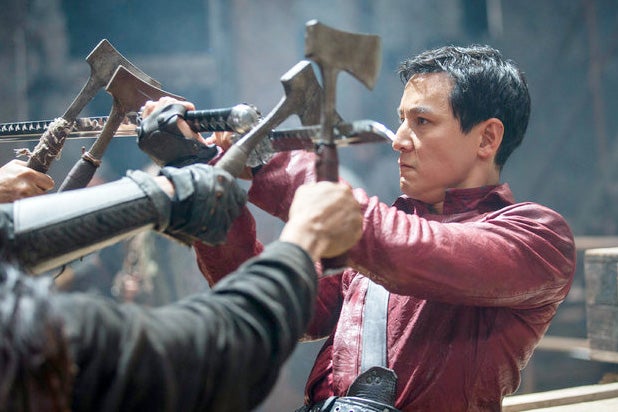 Producing and starring in AMC’s “Into the Badlands” is a professional experience that I never thought I would see. It’s not just because drama and martial arts done together with a diverse cast is an American television first. Or because joining its cast was an unexpected homecoming for me.

For the 20 years before “Into the Badlands,” I spent my career working largely in Hong Kong and China. In 1997, while traveling in Hong Kong just after graduating from the University of Oregon with a degree in architecture, I was spotted by director Yonfan. He asked me to take the lead role in his film “Bishonen.” Without either acting experience or a full grasp of the Cantonese language (Shanghai dialect was spoken at home), I turned down the role at first. He relentlessly pressed me to change my mind, and after a month I gave in.

It was a decision that changed my life and put me on a path that I never dared dream for myself. Two weeks after the film wrapped, I was on the set of my second film. Within two years I had done six films. By 2000, I was playing lead roles in everything from romantic comedies to big-budget action films. Now, 70 films later, my work has been embraced all over Chinese-speaking Asia.

Would any of this happened to me if I’d decided to start a career in acting at home? I really don’t think so.

Also Read: 'Into the Badlands' Renewed for Season 3 on AMC

Growing up a Chinese-American kid in 1970s and 1980s California, I saw no possibility for me to become an actor, especially one playing lead roles. There were many characters I loved on television — white, black and Latino — but I rarely saw people like myself represented. When I did see an Asian man appear on the screen, he was either a gross stereotype or something even worse.

I grew up watching “Kung Fu,” a TV series starring a white man (David Carradine) in yellow face playing a Chinese man. Legend has it that Bruce Lee had developed the concept for the show, hoping to creating an opportunity for himself. The studio loved the idea but cast a white man. While Bruce Lee eventually became a global icon, it was only after his untimely death — and after he first found opportunity in Hong Kong.

Almost two decades before “Kung Fu” aired, my parents immigrated to the U.S. Escaping war and political unrest, they came in pursuit of their idea of the American Dream. Both earned advanced degrees in the U.S. and worked to establish themselves professionally.

Arriving in Berkeley, Calif., as newlyweds in 1961, my parents were barred from purchasing the house they wanted when the realtor told them it was in a “Whites Only” neighborhood. Undeterred, they went on to buy a house in a neighborhood nearby. From that house they could see up into the Berkeley Hills where the most beautiful and coveted homes in town were.

My mom would often tell my dad, “One day we will have a house there. ” And less than 10 years later they did it. And from that point on, they set their sights on making sure that their three kids received every opportunity to achieve their own dreams.

My mother had lofty goals for us. I remember a period when my mother kept planting a seed in my head, telling me that I could be the first Chinese-American president of the United States.

So it is kind of ironic that I had to leave the country for 20 years and become known to an audience of 1 billion Chinese before I would have the opportunity to come back to the U.S. and live my American Dream. And it’s also ironic that my Shanghai-born parents were immigrants to the U.S. and that I went the opposite way, to Hong Kong. But the root of my parents’ journeys and my own was the same — the pursuit of opportunity.

In retrospect, I feel very fortunate to have begun my career the way I did. Living and working in Asia insulated me from the race issue that is all-pervasive in entertainment in the U.S., especially now. When I won a part in Hong Kong, it was because I was right for it and not just because I fit the bill racially. Conversely, if I was rejected, it was because of my ability, which was something I could work on and not because of my race, which I couldn’t. So instead of being an angry Asian American actor lamenting about limited roles, being in Asia allowed me to focus on the craft of acting and to choose roles that helped broaden me as an actor.

My time in Asia not only insulated me from spirit-breaking casting situations that my fellow Asian American actor friends endured, but it allowed me to become a better actor. It also brought me closer to my culture, and made me who I am today. When I did enter Hollywood, knowing that my peeps had my back gave me a lot of confidence. If I had spent years in U.S. casting rooms getting rejected because I wasn’t the right skin color, or turning down one stereotypical role after another, or taking said roles because I needed to pay rent, I would have quit a long time ago.

After the first season of “Into the Badlands” debuted, I was reluctant to be a racial role model. I just wanted to focus on the work and make great television. During my 20 years in Asia I never needed to talk about these topics, let alone be the center of attention about them.

But after the second season premiered, and we learned about the impact the show was having, I started to understand the importance of stepping up. I’ve accepted the fact that I am one of the very few Asian men in the American entertainment and that by default people were going to look to me symbol of change. So as people have embraced me I have learned to embrace that new role.

Am I going to run for president? Hell no. But I think my parents’ dream for me was to find my place in this country, to be successful at what I do and most importantly, to be happy. I am proud to know that I might have some part in righting what happened to Bruce Lee over 40 years ago. And I am proud that some kid might watch “Into the Badlands” and think, “I want to be like him!”

Daniel Wu is an actor, director and producer who has been featured in over 60 films, with his breakout role in Benny Chan's "Gen-X Cops." He received two more Hong Kong Film Award nominations in 2005: for Best Actor in "One Night in Mongkok" and Best Supporting Actor (alongside boyhood idol Jackie Chan) in "New Police Story," a role that also brought him Taiwan's Golden Horse Award as Best Supporting Actor. He also won the prestigious Hong Kong Film Award for Best Director for his 2006 feature, "The Heavenly Kings." His string of international film hits includes "Night Corridor" (2003, Best Actor nomination at Taiwan's 40th Golden Horse Awards), Frank Coraci's 2004 remake of "Around the World in 80 Days," Quentin Tarantino's presentation of "The Man With the Iron Fists" (2012), "Europa Report" (2013), Jackie Chan's "Chinese Zodiac" (2012) and Dean Devlin's "Geostorm" (2017). Wu also starred in Duncan Jones' epic sci-fi adventure "Warcraft" (2016) and opposite Alicia Vikander in "Tomb Raider" (2018). In April 2018, he returns for his third season as Sunny in AMC's "Into the Badlands."
KEEP READING..