Beijing-born Chloé Zhao took him the Academy Award for best director Sunday night, but her countrymen might not know: Chinese state media has ignored her Oscars win for “Nomadland.”

By Monday morning, no mention of Zhao or her win could be found on the websites for state news agency Xinhua or broadcaster CCTV. In fact, according to CNN, the Oscars didn’t even air in China on Sunday, though the program has streamed there in the past.

The issue seems to stem from a recently-resurfaced 2013 interview with Filmmaker Magazine, in which Zhao described growing up “in a place where there are lies everywhere,” referring to China. 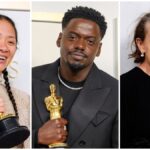 Reports on Monday indicated that not only was the ceremony not shown and Zhao’s win not announced, but social media posts from Chinese fans about the win were scrubbed from the internet.

One observer noted on Twitter that she felt “emotional” not only because of Zhao’s win and what “Nomadland” meant to her, but also because of “the silence of Chinese social media on the whole thing.”

On Sunday, Zhao became the first woman of color in history to win Best Director at the Academy Awards for “Nomadland,” a victory that came more than a decade after Kathryn Bigelow broke the gender barrier with “The Hurt Locker” in 2010.

Zhao is only the second woman ever to win the award. Her win also means that Asian directors have won the Oscar the last four times they’ve been nominated (Ang Lee won in 2006 and 2013, while Bong Joon-ho won in 2020).