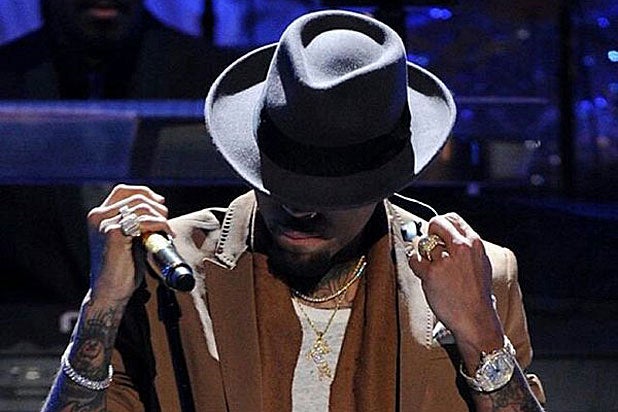 Fox’s “Empire”-inspired “Taraji and Terrence’s White Hot Holidays” special welcomed a collection of stars on Wednesday night, but it was Chris Brown‘s performance that caught the attention and wrath of fans on Twitter.

Taraji P. Henson and Terrence Howard hosted the holiday variety show and were joined by members of the hip-hop drama’s cast including Jussie Smollett and Bryshere Y. Gray to belt out festive songs such as “Joy To The World” and “All You Need Is Love.”

However, Brown’s singing was a far cry from his usual standard when he took the stage towards the end of the show, and was soon slammed on social media as fans asked if he was sick, high or “had lost it.”

Brown was quick to respond by revealing that he was not feeling well. “Grind season been in full effect. Been under the weather,” he tweeted.

I appreciate @TherealTaraji for allowing me to come on their Holiday special. Grind season been in full effect. Been under the weather.

Y'all know what @chrisbrown is capable of vocally. HE SHOWED UP W/LOVE IN HIS HEART PERIOD Happy #WhiteHotHolidays ???? https://t.co/m1zk1VGQGH

During the show, Brown then got a helping hand from R&B singer Tank for a duet of “This Christmas Will Be a Very Special Christmas To Me.”

Later, Henson and Howard (a.k.a. Cookie and Lucious Lyon) acted out a festive skit where they swapped Christmas presents, with Taraji giving him an ugly sweater and him gifting her with a cuddly puppy, called Terrence, of course.

Another somewhat creepy comedy bit featured Howard as a hard-working father and Henson (with pigtails and a squeaky voice) as his excited daughter waiting for Santa on Christmas .

See the tweets about Brown’s performance below.

@chrisbrown you did awesome.. forget what everybody else is saying! Feel better ????????

So we're all gonna act like Chris Brown wasn't carrying on like the Tin Man & Eddie Cain Jr. rolled into one? Oh, okay #WhiteHotHolidays

Chris Brown knows he can't hit all those notes anymore. He doesn't even try ????

Chris Brown had to hit about three lines and smoked a loose one before his performance. That was terrible.

#WhiteHotHolidays enjoyed @MsPattiPatti and @johnlegend . Was @chrisbrown performance for real, he looked like a hot mess.