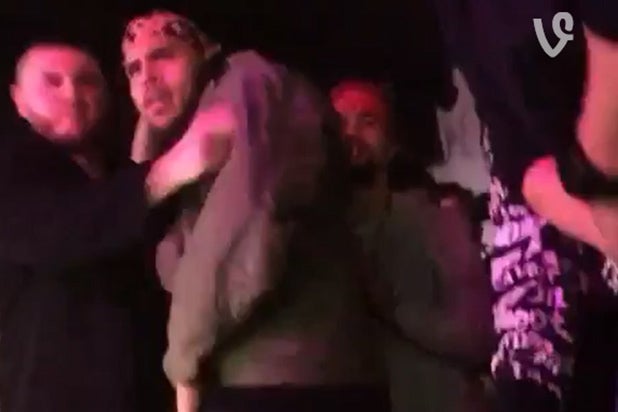 Chris Brown reacts as shots are fired in a nightclub (Vine)

A Los Angeles judge revoked Chris Brown‘s probation in the Rihanna assault case Thursday, saying Brown should have gotten permission from his probation officer before leaving L.A. for Bay Area show where five people were shot.

As TheWrap previously reported, Brown was performing his hit single “Loyal” early Sunday morning at the Fiesta Nightclub in San Jose, when someone opened fire.

“Upon arrival, officers located four victims suffering from at least one gunshot wound each,” San Jose police said in a statement previously issued to TheWrap. The victims were taken by ambulance to an area hospital. A short time later, a fifth victim “walked into a local area hospital suffering from a non-life-threatening gunshot wound,” police said.

Video posted on Vine showed a chaotic scene in the club when the shots rang out. Police said all five victims are expected to survive.

Noting there is no evidence that Brown was involved in the shooting, Los Angeles Superior Court Judge James R. Brandlin released the star on his own recognizance Thursday. Additionally, the judge scheduled a hearing for Mar. 20, when he will get a full report from the probation department.

Brown’s attorney, Mark Geragos, told Brandlin his office had incorrectly advised Brown that he didn’t need permission to travel to the show in Northern California.

The judge said Brown was otherwise in compliance with the terms of his probation, but still had 202 hours of the 1,000 hours of agreed-upon community labor requirements to complete. “It’s a favorable report,” the judge said, adding that Brown had tested negative for drugs, had been attending therapy regularly and was showing a “cooperative attitude.”

Brown’s probation stemmed from his 2009 assault of then-girlfriend Rihanna in the Hancock Park section of Los Angeles.