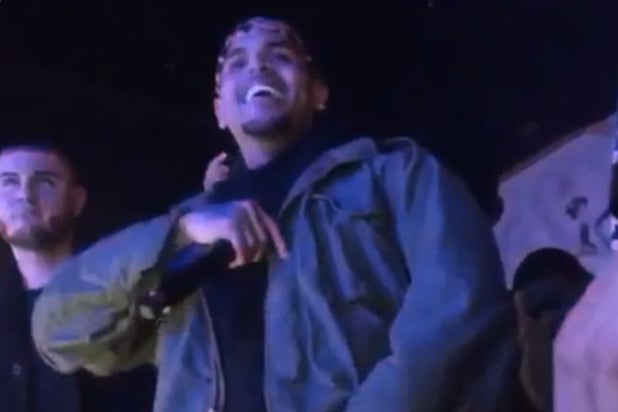 Chris Brown is shown moments before a nightclub shooting (Vine)

The shooting unfolded around 1:20 a.m. at the Fiesta Nightclub in the 3800 block of Monterey Road.

“Upon arrival, officers located four victims suffering from at least one gunshot wound each,” San Jose police said in a statement issued to TheWrap.

Also Read: Chris Brown’s Advice for Ray Rice: ‘I’ve Made My Mistakes Too, But It’s All About How You Push Forward’

The victims were transported to an area hospital where they are being treated for their injuries. Their conditions were not immediately known. “Moments later, a fifth victim walked into a local area hospital suffering from a non-life-threatening gunshot wound,” police said.

Videos posted on Instagram and Vine showed Brown on stage performing his hit single “Loyal” when gunshots rang out and everyone hit the floor.

Several people have been detained by officers as they conduct a follow-up investigation, police said. A representative for Brown has not yet responded to TheWrap’s request for comment.

It’s not the first time an appearance by the pop star has been marred by violence.

In August, Death Row Records founder Suge Knight was shot several times at an unofficial MTV VMAs pre-party hosted by Brown. Two other people were also struck by gunfire, including a 32-year-old man and a 19-year-old woman. All of the victims survived.

Shortly after that incident, Brown tweeted: “It’s disappointing that we as a society can’t have fun or enjoy ourselves without any altercations.

To watch the video of Brown’s Sunday performance, click here.