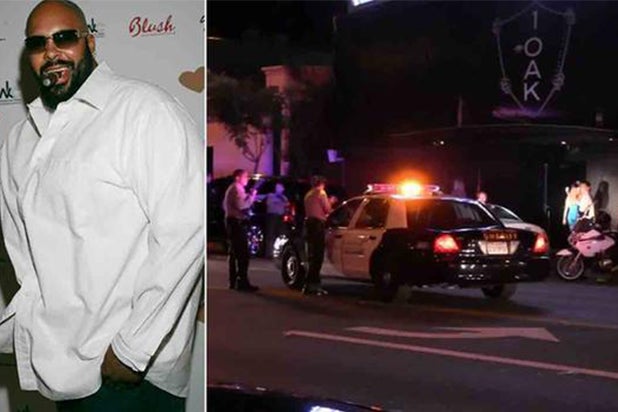 Knight, 49, was shot several times when someone opened fire at the party around 1:30 a.m., the Los Angeles County Sheriff’s Department said in a statement obtained by TheWrap. Two other people were also struck by gunfire, including a 32-year-old man and a 19-year-old woman.

All of the victims were taken to local hospitals and are expected to recover, the Sheriff’s Department said. As of 10:30 a.m., Knight was listed in stable condition. The other two victims’ conditions were not known.

Witnesses described a chaotic scene. “I looked down through the glass to the bottom level, and people were pushing,” partygoer Hayley Belle told KABC television in Los Angeles. “Most people on the floor, people were pushing, running, falling on glass, glass smashing, but the only person still standing was Chris Brown at this point.”

Meanwhile, the gunman fled the scene and remains at large, the Sheriff’s Department said.

Shortly after Sunday’s violence unfolded, Brown tweeted about the incident, writing, “It’s disappointing that we as a society can’t have fun or enjoy ourselves without any altercations sometimes. Miss me with the bulls–t!!!”

As for Knight, he is no stranger to violence. He was shot in the leg in 2005 at a VMAs pre-party in Miami. In 1996, rapper Tupac Shakur was fatally shot in Las Vegas as he rode in a car driven by Knight. The hip-hop mogul has also been in and out of prison.

On Saturday, Brown posted an invitation to the party on his Instagram page announcing it was being held to celebrate the release of his upcoming album “X.”  “Pre-VMA Party @1oakla tonight! #XTheAlbum 09/16/14,” Brown wrote.

However, MTV issued a statement to TheWrap distancing itself from the gathering. “MTV has no affiliation nor is connected to this event in any way,” the statement said.

Lately, the Los Angeles-area has seen an increase in awards show-related violence. In June, one person was killed and five others injured at unofficial BET Awards pre-parties.

The VMAs will be held Sunday evening at the Forum in Inglewood, and will air live on MTV at 9/8c.

Nicki Minaj, Ariana Grande and Jessie J are set to open the show with a performance of their single “Bang, Bang,” which they released in July.

It's disappointing that we as a society can't have fun or enjoy ourselves without any altercations sometimes. Miss me with the bullshit!!!