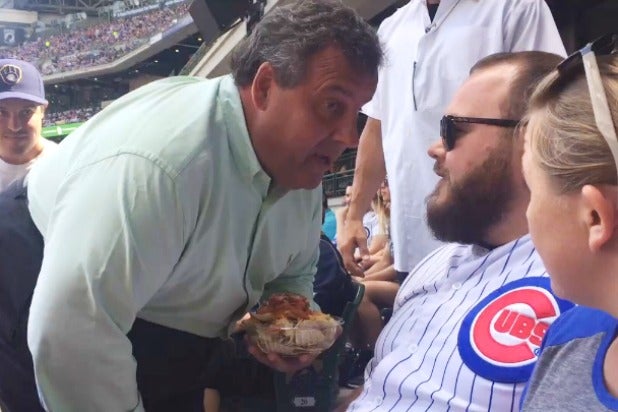 Gov. Chris Christie’s approval rating among his New Jersey constituents is hovering just above sea level at 15 percent and, given the reception he got at a Cubs-Brewers game Sunday afternoon, the folks in Milwaukee, Wisconsin, aren’t too crazy about him either.

The unpopular governor was attending a baseball game at Miller Park stadium in Milwaukee when WISN 12 News reporter Ben Hutchison caught him in an “in your face” moment with Chicago Cubs fan, Brad Joseph.

It began when Joseph saw Christie heading up the stairs about 30 feet away clutching a bowl of nachos. Joseph yelled his name and “told him that he sucked,” the Cubs fan said.

Also Read: 'From the Beach to the Ballpark:' Watch Chris Christie Get Booed at Mets Game (Video)

“I called him a hypocrite because I thought it needed to be said,” Joseph told Hutchison. No doubt, that caught the governor’s attention because he made an about-face and headed Joseph’s way.

“He turned around back towards me and got in my face for what seemed like a long time, but was probably only about 30 seconds or a minute,” Joseph continued. “(He) was yelling at me. First, he told me, ‘Why don’t you have another beer?’ which I thought was a decent come back, and I thought that was kind of funny. Then he started calling me a tough guy.”

That’s when Hutchison, who is related to Joseph, flipped on his video camera. You can see the confrontation in the video below.

At #Cubs #Brewers game. #ChrisChristie was getting razzed by fans, so he got in the face of one of them. 5:30 on @WISN12News pic.twitter.com/sx8euMgFy2

As Christie walked away, surrounding fans cheered. On a positive note, the governor didn’t drop a single chip.