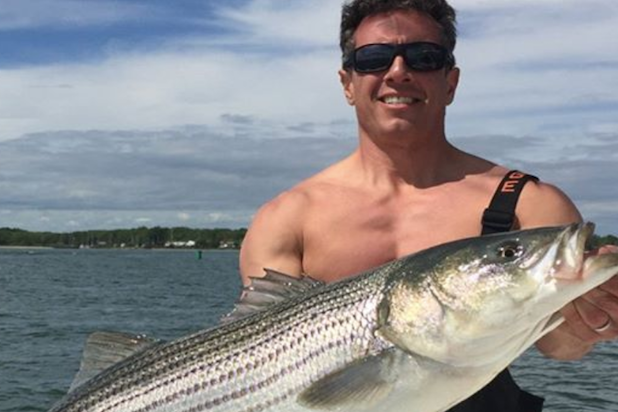 CNN anchor Chris Cuomo is hot — and he knows it.

When a fan tweeted to let him know that that his “sexiness is annoying” and got in the way of the news, Cuomo couldn’t help himself.

“You can’t – the sexy is overwhelming. Don’t hate – spectate,” he said.

You can’t – the sexy is overwhelming. Don’t hate – spectate. https://t.co/M28wSBZVBH

The tweet came shortly after a “New Day” segment on People Magazine’s new sexiest man alive, Blake Shelton. The magazine also included a nice spread about Cuomo in a feature called “hot off the press.”

“I want to thank everybody for their votes,” Cuomo said on air. “It came as no surprise to me.”

“The animal magnetism I have to witness — mostly from men around you,” said co-host Alisyn Camerota. “There are a lot of men who do approach me to find out what you’re like.”

Cuomo has not been shy about looking his best on and off-camera — some of his best moments have come posing with large fish.

This ain’t fake… But it is a fluke 🙂 less negativity, more positivity! That is my wish for everyone over this important weekend. I hope you enjoy family, good times, and good thoughts about our collective freedoms. We are a very, very lucky people.#Southampton #Fluke #Fishing #FourthofJuly #Goodtimes

OH YEAH, STRIPED BASS BABY! 35+ LBS (~4 ft long) of head tossing action in a solid rip. First big mama of the season. Fishin with a good friend on a nice day. Catching was a bonus. If you like this pic but feel for the fish (I don’t). Watch next video. #fishing #stripedbass #hardwork #summer #friends