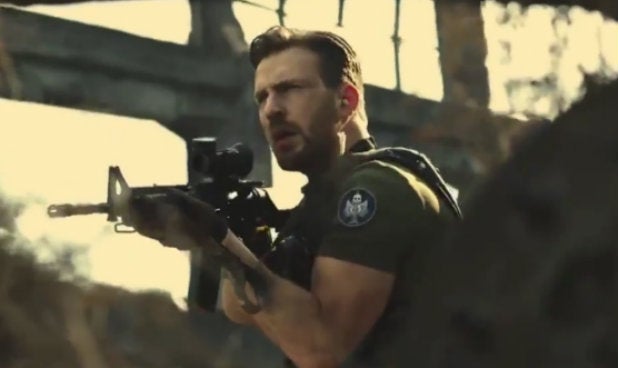 Chris Evans is the latest action hero to nab a side gig over at “Call of Duty.”

Evans sheds his “Captain America” suit for battle fatigues, popping up in a trailer for the forthcoming “Call of Duty Online,” a multi-player version of the POV shooter game, developed exclusively for China.

The commercial follows a group of hotel staffers sneaking off for gaming excitement, when Evans drops in for bicep-flexing, rope-swinging, surface-to-air missile launching and the like.

The hybrid will combine characters from game iterations like “Modern Warfare,” and “Advanced Warfare,” according to publisher Activision. In-game purchases will be available for avatar and weapons upgrades.

Previous actors who have popped up in “Duty” ads include Evans’ “Avengers” co-star Robert Downey Jr., as well as “John Carter” heartthrob Taylor Kitsch. Kevin Spacey, of “House of Cards,” had a prominent voiceover role in 2014’s “Call of Duty: Advanced Warfare.”

Evans heads back to his day job this year to film “Captain America 3: Civil War,” which features Downey Jr. as antagonist and counts directors Joe and Anthony Russo. Watch the full “Call of Duty Online” trailer.