Vibranium, of course, is the fictional metal substance from Wakanda that Captain America’s shield is made of. Evans is set to return as Captain America for what many expect to be the final time in next month’s “Avengers: Endgame,” which will finish the story from last year’s “Avengers: Infinity War.”

Crenshaw, a former U.S. Navy SEAL who lost his right eye in Afghanistan, gained notoriety last fall when “Saturday Night Live” star Pete Davidson mocked his appearance on the late night series’ Nov. 3 episode. The episode came three days before Crenshaw was elected as the U.S. Representative for Texas’s 2nd congressional district. Davidson’s comments resulted in immediate backlash. He appeared the following week to apologize, with Crenshaw joining him to provide some hilarious insults of his own. 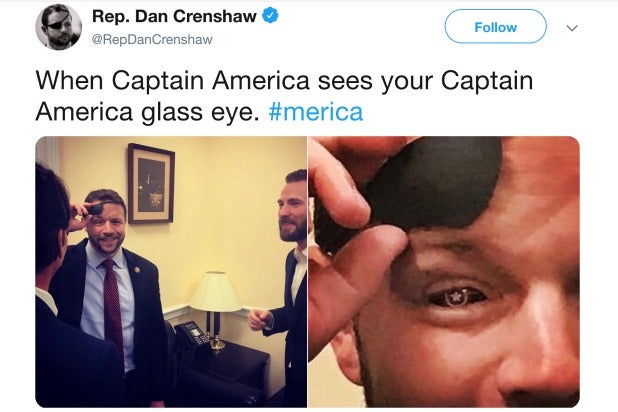 A VERY cool use of vibranium https://t.co/zv5L9hqqTl