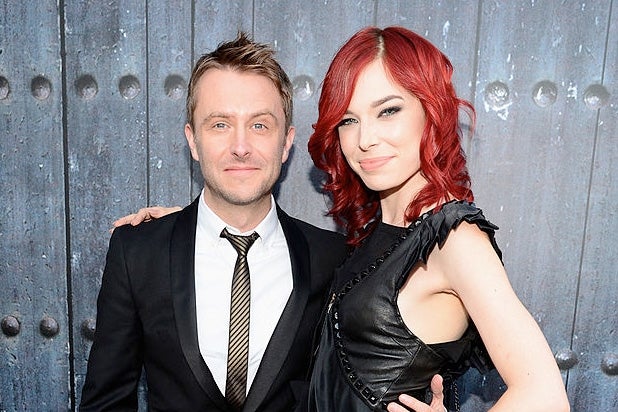 Chris Hardwick’s ex-girlfriend Chloe Dykstra has spoken out after AMC reinstated Hardwick as the host of “Talking Dead” following a review of a misconduct accusation against him.

In a lengthy Twitter statement, Dykstra said that she intends to “move on with my life.”

“I originally wrote my essay so I could move on with my life, and now I intend to do so,” Dykstra tweeted on Thursday. “Thank you, again, to those who have supported me during this.”

Hardwick was apparently accused of misconduct by Dykstra in a June Medium essay. Though Dykstra did not name the former boyfriend, whom she said pressured her into sex and ultimately derailed her career, it was pretty easy to connect the dots to the Nerdist founder.

In her essay, titled “Rose-Colored Glasses: A Confession,” the 29-year-old said that when she was in her early twenties she dated a man “almost 20 years my senior” who displayed what she called “controlling behavior.”

She also accused the man of pressuring her into sex against her will, though she wrote, “To be fair, I did go along with it out of fear of losing him.” She added that “after three years of being snapped/yelled at constantly, very rarely being shown any affection- I finally left him.”

Hardwick was subsequently suspended by “Talking Dead” network AMC. On Wednesday, an AMC spokesman said that Hardwick would return to for the coming season.

“Following a comprehensive assessment by AMC, working with Ivy Kagan Bierman of the firm Loeb & Loeb, who has considerable experience in this area, Chris Hardwick will return to AMC as the host of ‘Talking Dead’ and ‘Talking with Chris Hardwick,'” an AMC spokesman told TheWrap. “We take these matters very seriously and given the information available to us after a very careful review, including interviews with numerous individuals, we believe returning Chris to work is the appropriate step.”

“I have been adamant since I came forward with my essay that I never set out to ruin the career of the person I spoke about. I could have provided more details, but chose not to. I have said what I wanted to say on the matter, and I wish to move on with my life,” Dykstra wrote. “For that reason, I chose not to participate in the investigation against the person I spoke of. I do not believe in an eye for an eye, and therefore I have only shared my evidence with those who I felt should see it.”

Dykstra continued, “With the circus moving out of town, I intend to focus on the subject I originally wanted to shed light on: emotional abuse. I plan to continue this conversation and intend to work with institutions like RAINN and other support groups for survivors.”

She concluded, “I hope that the hatred, the name calling, the death threats can go away and we can return to productive discourse. My love to everyone.”

While Hardwick, who denied the accusations of abuse, has been reinstated from AMC, he lost a moderating role at July’s Comic-Con and a stand-up comedy spot at festival Humor Me, and was scrubbed from the Nerdist website following Dykstra’s essay.

I originally wrote my essay so I could move on with my life, and now I intend to do so. Thank you, again, to those who have supported me during this. pic.twitter.com/sjBEKGpY7v