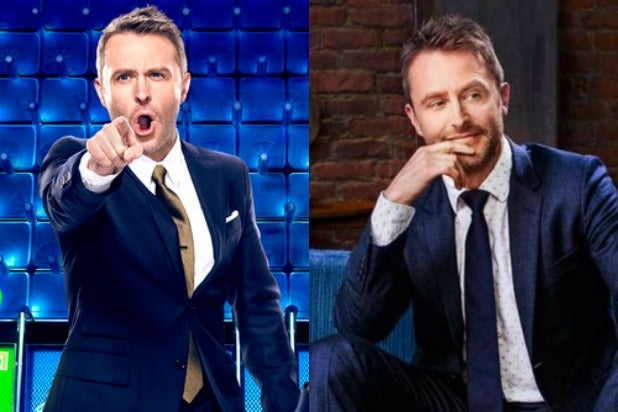 Is Chris Hardwick’s current bad rap enough of a reason to cut him loose — or do AMC and NBC lose more if they lose him?

That’s the question the two networks, each with Hardwick-hosted shows, are mulling over at the moment. And while they have multiple priorities to consider when making decisions like this, ratings factor into almost every move made in the TV industry.

The Nerdist co-founder’s media empire, which includes geek-friendly shows on both AMC and NBC, was dealt a significant blow after actress and former Nerdist host Chloe Dykstra posted a Medium essay last week, accusing her ex-boyfriend of “sexual assault,” “controlling behavior” and career sabotage after their breakup.

In a carefully-worded statement, Hardwick denied that he sexually assaulted Dkystra. But AMC still took “Talking With Chris Hardwick” off its schedule just one day before its second-season premiere, and the network has essentially suspended its relationship with the geek impresario pending an investigation of Dykstra’s accusations. (Hardwick’s “Fear the Walking Dead” after-show, “Talking Dead: Fear,” wouldn’t start up again until the second-half of Season 4 premieres on August 12.)

But does the cable network even need Hardwick in the role? He’s a capable host, for sure, but his after-shows aren’t exactly lighting the world on fire in TV ratings.

From Season 7 to the recently concluded Season 8, “Talking Dead” sunk 28 percent in total viewers and 35 percent in the key 18-49 demographic. We’re counting three days of delayed viewing, just like AMC does.

What those inside AMC refer to as “Talking Fear” has also declined by double digits (-13 percent and -23 percent, respectively), despite stable Nielsen numbers from the “Walking Dead” spinoff. Though that trend is probably more due to scheduling: “Taking Fear” used to run at 10 p.m., immediately after “Fear the Walking Dead,” but it has now been shifted to 11 p.m so that “Fear” can serve as the lead-in for AMC’s apocalyptic action series “Into the Badlands.”

It’s also worth noting that if AMC decides to cut ties with Hardwick, it won’t necessarily need to cut the “Talking” family of shows along with him. Fans have already begun rallying behind potential replacements, with the frontrunner being “Community” alum Yvette Nicole Brown. Presumably her followers — or any potential successor’s — would turn into viewers that could fill a Hardwick-shaped hole in AMC’s Nielsens.

Meanwhile, NBC took a less-than-direct position on Hardwick, saying in a statement Saturday only that it was “continuing to assess” the situation and would take “appropriate action based on the outcome” of that assessment. Hardwick has two projects with NBC, his game show “The Wall,” the next season of which is scheduled for September, and an in-development science and techn-centric series called “The Awesome Show.”

Also Read: Chris Hardwick Fallout: All the Outlets Distancing Themselves After Abuse Accusation

While it’s unclear whether or not “The Awesome Show” will ever actually see the light of day, “The Wall” is a solid performer for NBC, the No. 1-rated network that pretty much just plugs the millionaire-maker in wherever it needs an hour.

In its freshman season, “The Wall” aired Tuesdays at 8 p.m., Mondays at 10 p.m., and Thursdays at 8 and/or 9 p.m. Season 2 was all Mondays at 8 p.m. — yet another time slot. In “live” ratings, “The Wall” dipped 14.3 percent year over year — two-tenths of a Nielsen point. That’s not bad for being all over the place the first time around and it saw a 2.2 percent increase in total viewers.

So Hardwick’s game show is a helper, but it isn’t like NBC doesn’t know how to air a successful game show on its own. Which is to say, it’s unclear how many tears the Peacock would shed if they had to replace him as host for the upcoming third season.

However they decide, both networks have a few months to figure out what Hardwick is worth, ratings-wise.