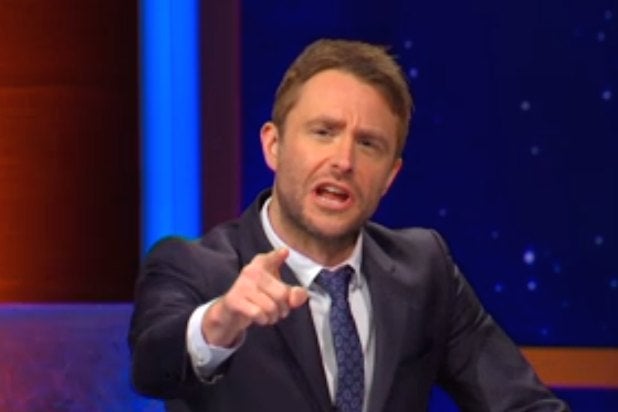 After 4 seasons, “@midnight with Chris Hardwick” is ending its run on Comedy Central, TheWrap has confirmed. The show will end on August 4 with its 600th episode.

According to the network, the decision to end the comedy competition series was mutual. “Comedy Central and Chris Hardwick have mutually agreed the August 4th episode of ‘@midnight’ will be the series finale. We thank Chris, Tom Lennon, Ben Garant, and our partners at Funny Or Die, Serious Business and Brillstein Entertainment Partners for an incredible four seasons and 600 episodes of one of the best showcases for comedians on TV,” the network said in a statement.

Debuting in October, 2013 for a limited run following “The Daily Show with Jon Stewart” and “The Colbert Rerport,” “@midnight” has won two Creative Arts Emmys. The panel show pits three guests — usually comedians — against one another in various improvisational contests for which the receive “Points.” The winner at the end of the show is declared to have “won” the internet for the next 23.5 hours.

“‘@midnight’ has meant the world to me these last four years. It has been a dream to come to work 600 times to make inappropriate jokes about the Internet with my fellow comedian friends,” Hardwick said in a separate statement. “I could not be more proud of this show, staff and crew and at the end of the day, I think we accomplished everything we wanted to accomplish. Spiritually it just feels like it ran its course–I’m not sure we had many more hashtag games in us (which may actually be a relief to anyone whose twitter feed gets overrun every night).”

“I owe such a huge debt of gratitude to Comedy Central and Kent for taking a chance on the show, always being great partners and allowing us to exit mutually, which is rarely a gift you are given in this business. I will certainly miss awarding POINTS! to people nightly, so please understand if you see me randomly shouting it at strangers in public after August 4th.”