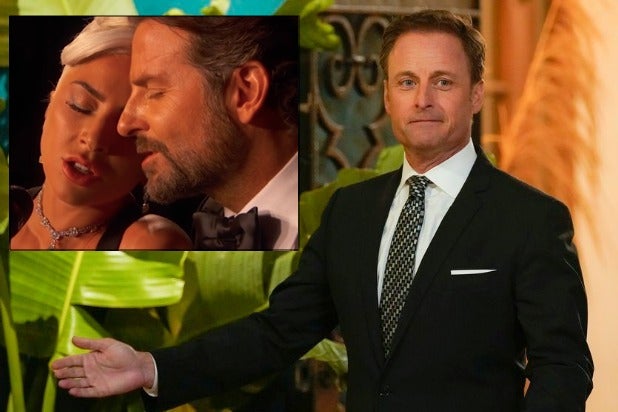 “The Bachelor: Listen to Your Heart” host Chris Harrison says the romantic spinoff of “The Bachelor” franchise had a rather surprising inspiration: Lady Gaga and Bradley Cooper’s very steamy performance of their hit song “Shallow” from “A Star Is Born” at last year’s Oscars.

“Oh, my God, they could literally be rolling on the floor right now making love,” Harrison recalled in a recent interview with TheWrap. “We thought, could we do this? Could we put a ‘Bachelor’ spin on this and create a couple that is also an incredible singing duet?”

Apparently, they could because the latest offshoot of the popular dating show franchise — which premieres Monday — finds singles not just looking for love, but also for musical success.

Harrison, however, conceded that when they first started filming the show, he wasn’t sure whether fans would bond with it as much as they have with “The Bachelor,” “The Bachelorette” and “The Bachelor in Paradise.” In “Listen,” contestants will be completely new to the franchise, so there will be no familiar faces from seasons past.

“That was my big fear when we started,” Harrison said. “Will people connect? Will there be that same kind of passion that Bachelor Nation has with other shows? Quickly I realized, yes. This works. You will connect with these people.”

The show’s format is like a mix between “Bachelor in Paradise” and a talent competition series. Like “Paradise,” each episode will end with a rose ceremony, alternating biweekly between the men and women. As time goes on, newcomers will be thrown into the mix and eliminations will continue until all the couples have been established.

And that’s when the music comes in.

The newly formed couples will then be tasked with performing duets on stage together at bigger and bigger venues each week. At that point, it will be up to celebrity judges and past “Bachelor” stars to decide who stays and who goes based on their chemistry, both on and off the stage.

The question, Harrison said, boils down to this: “Can we create a power couple that can find it all — love and success on the stage?”

Find out when “The Bachelor Presents: Listen to Your Heart” premieres on April 13 at 8 p.m. ET/PT on ABC.