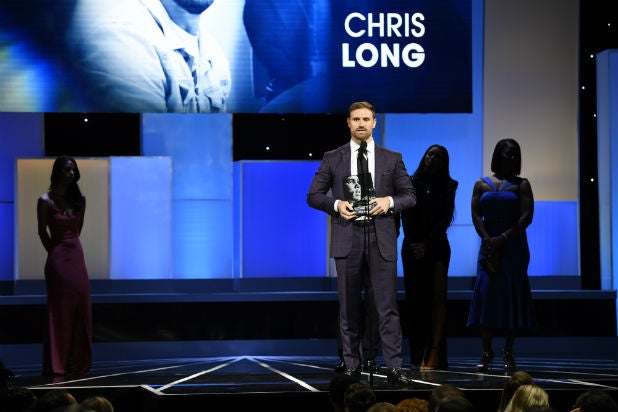 Before the biggest names in sports were celebrated for their championship achievements at the ESPYS, the Fifth Annual ESPN Sports Humanitarian Awards once again celebrated the positive things that athletes do on Tuesday night.

Ciara hosted the VIP event at L.A. Live’s The Novo in Los Angeles for the first time, with singer Andy Grammer warming up the audience with a lively rendition of “Honey, I’m Good” before they honored those who give back.

The most coveted award of the night was the Muhammad Ali Sports Humanitarian Award, which this year went to former Philadelphia Eagles defensive end and founder of Waterboys.ORG, Chris Long.

In 2017, Long donated his entire year’s salary to charity, and was chosen for his “commitment to giving back through strategic, multifaceted efforts,” which attack larger systemic issues such as building wells in East Africa.

“It is nice to see the growth of the Humanitarian Awards every year,” Laila Ali, Muhammad Ali’s daughter, told TheWrap earlier in the night. “People are more aware about athletes’ philanthropy work and giving back, so I think it is going to continue to grow .. the more exposure we give to athletes giving back will encourage others to do the same themselves.”

WWE chief brand officer Stephanie McMahon has also long been a staple at the Humanitarian Awards and was a recipient of the Stuart Scott ENSPIRE Award in 2017. WWE encourages its superstars to give back to the community through four pillars: inclusion, hope, service and empowerment, McMahon said, plus partnerships with the Boys and Girls Club, Tribute to the Troops, UNICEF, Make-a-Wish, and Connor’s Cure, which has raised over $3 million for pediatric cancer research with the V Foundation.

“We just officially just announced today our partnership with Girls Up Inc. that is part of the UN program and we’re launching a program called Sports for a Purpose, not just for athletes but to show all the other jobs there are around sports for women,” McMahon told TheWrap. “It is a great cause and we’re really proud to be a part of it.”

“I really enjoy this event in particular and I wish there were more like it for people to see all of the good that is being done in the world, and to inspire others to do more,” she added.

WWE Superstars Seth Rollins and Becky Lynch, who graces the current ESPN the Magazine cover along with Alison Brie, were also on hand to show how WWE Superstars pay it forward.

“We’re role models to men and women all over the world, it is so important to stand for something and inspire people,” Rollins said. “We’re very proud of that.”

This year’s winners include:

The net proceeds of the event will once again benefit the Stuart Scott Memorial Cancer Research Fund at the V Foundation. To date, $7.5 million has been donated to the community on behalf of the Sports Humanitarian Awards.

The winners will be announced at the awards ceremony on Tuesday and highlights of the evening will be showcased during a one-hour program on ESPN, July 18, at 7 p.m. ET.